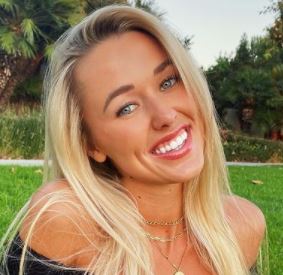 The news about Heather Martin’s return for Matt James’s season of The Bachelor was trending amongst the fans in Dec 2020. According to “Reality Steve”, Heather would appear late on the season but would almost immediately be sent home, unable to charm Martin.

Previously, Heather was a fan-favorite contestant on Colton Underwood’s season of The Bachelor. Just in case you missed it, worry not! for here we are shedding light on the personal life of Heather Martin over this bio.

Stay till the end to learn all about her.

Corresponding to her birthday, Heather is of Libra zodiac.

Fun Fact: Heather missed her 24th birthday celebration because she was busy shooting The Bachelor. She mostly celebrated it with her family.

Heather Martin grew up in her hometown Carlsbad, California alongside her two siblings named Colie and Shannon.

Her sister, Colie was an amazing soccer player. She was even named to the Scholar All-West regional Team; the team only named players based on their success on the field and classroom.

As for her parents, Heather was born to Jan and Paul Martin. They celebrated their 30th wedding anniversary on June 23, 2019.

Her mother, Jan worked in a bank at Beverly Hills for 10 long years. She was even asked to appear on their cover in 1986.

Also, Heather has a niece named Peyton Pogge who won the 1A cross country state championship.

Taking one look at the Martin family’s Instagram, we could see that all of them are a devoted Christian. They often phrased the paragraphs from the Bible over their captions.

As for her interests, Heather loved horses. She was often seen in pictures alongside her horse; she even went horse riding for hours with her friends and sisters.

Also, Heather is a book lover. Her choice of reading included anywhere from Moving Mountains by John Eldredge to In Five Years by Rebecca Serle.

Trivia: it was Heather’s sister, Shannon who signed her up for The Bachelor.

Reportedly, her body measurements were 34-26-36 inches.

As of Dec 2020, Heather flaunted 234K followers over Instagram. Her bio wrote,

Heather Martin is a reality star and an aspiring model. Apart from appearing on The Bachelor, she already had pictures up on Francesca’s promoting fancy clothes.

Before stepping onto the showbiz, Heather used to work for Aethercomm. She was the assistant program manager and assistant to the chief operations officer for 3 years and 5 months. Also, she took a job at the Women’s Pregnancy Care Clinic and Van Dyke Coffee Roaster as a marketing research consultant.

For internship, Heather went to Dogs on the Run from May 2015 to the next four months.

In light of her education, Heather attended Biola University Crowell School of Business for her Bachelor’s degree in Marketing from 2013 to 2017. During her time there, she was the “student development representative, student orientation crew leader, and event marketing intern”.

Also, she had a Hootsuite Platform Certification.

As per rumors, Heather Martin wouldn’t make it far with Matt James, and some believed that it was just another drama involving former Bachelorette Hannah Brown.

We know that Heather and Hannah were best friends and also Hannah was close to James. The theory was Hannah may have tried to play matchmaker with the Bachelor producers just to see James push the idea of Martin out of frame quickly.

Coming to Heather’s stint on Colton Underwood’s season of The Bachelor, fans were almost immediately intrigued by Heather’s ABC’s profile. The producers had written “Never Been Kissed” under her name and age, instead of the actual details.

Later in the show, Heather revealed that she was a virgin and never kissed anyone. Being on the same boat, Colton made a sweet reaction then but unfortunately, Heather just made it to week 3.

Reportedly, Heather and Colton first met at an event in San Diego in July 2018. Heather even posted a  picture of the Bachelor and herself over Instagram then.