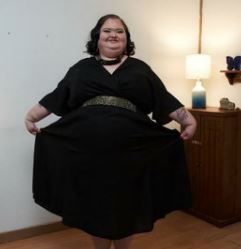 In early January 2021, TLC’s 1000-lb Sisters star Amy Slaton revealed she was expecting a baby with her beloved husband. But the news came as a mixture of happiness and tragedy as she was not supposed to have a baby at least two years after the surgery.

On the show’s 1st March 2021 episode, fans learned that Michael Halterman and Amy welcomed a son named Gage Deon Halterman. Baby Gage arrived via C-Section in late-December 2020. The doctors performed tests on Gage because he had low blood sugar.

Scroll down to learn more about the TLC’s reality star if you haven’t read about her already.

As reported by Famous Birthdays, Amy Slaton celebrates her birthday every year on 28 October. She turned 33 years old while celebrating her birthday in 2020. Per her date of birth, Amy Slaton secured Scorpio as her zodiac sign.

More about Darlene: She is no longer with Amy’s father. In fact, she married Frank who also stars on the TLC’s reality show. Frank, whose real name is Robert Franklin Rednour, suddenly passed away in early-Jan 2021. He was 62 years old.

Whereas, Amy and her siblings credit their grandma more than Darlene. While Darlene spent a lot of time at work, their grandma looked after the Slaton siblings.

More on her family: Amy grew up with at least one sibling, her sister Tammy Slaton. Later, the fans learned the twosome had a brother named Chris Combs who was also undergoing weight loss. The Slaton siblings also had a few clashed at times but reconciled their difference as they support each other.

TLC’s reality show 1,000-lb Sisters alone was a misleading title that made viewers think that each of the sisters weighed 1000-lbs. In fact, Amy Slaton weighed 406 lbs when the show started. Amy Slaton now weighs about 290 pounds as of this writing. Moreover, she qualified and underwent bariatric surgery by the end of season 1. As for her height, she stood tall at 5 feet 4 inches.

Amy Slaton’s popularity is thriving on social media. It is apparent through the number of social media followers she has. Moreover, Amy’s Instagram account gathered 146k followers in total. In the same way, her Twitter account flaunts 4531 followers as of March 2021. However, Amy couldn’t be located on Facebook.

As of this writing, Amy Slaton with her earnings from the show sits on a total net worth of $250 thousand.

Before earning fame as a reality star, Amy Slaton and her sister Tammy started a YouTube channel in 2011. She posted daily vlogs, DIY videos, cooking, playing with their pets, and anything generic to the platform.

However, it was their makeup tutorial videos, The Power of Makeup in particular, that went viral earned the two sisters wider recognition. As of this writing, Amy’s YouTube channel gathered 239k subscribers. Moreover, Amy was in a feud with another overweight YouTuber Amberlynn.

As for their debut as a reality star, Amy and her sister appeared on TLC’s 1000-lb sisters. Both sisters attempted to lose enough weight so they could have bariatric surgery. The show followed the same theme as another show titled My 600-lb Life.

When fans of 1000-lb sisters wanted to know the reason behind their weight, Amy stated that she grew up having a normal body weight as a young girl. However, when her grandmother passed away at the age of 10, she started gaining weight.

The unhealthy eating cycle piled up over the years gaining them the weights that they never had imagined they would be attending.

1000-lb Sisters debuted on 1 January 2020. The show had her and her elder sister Tammy visiting doctors, deal with the challenges of healthy eating, and of course the personal drama they had.

But it was during the show, the two sisters got along together as they depended on each other for living with the over-weight. Even though the reality star sisters wanted to opt for healthy habits, they found it was quite an expensive challenge.

As a piece of trivia, Amy also got into a fair share of trouble growing up. She once stole a book from Walmart, got caught, and was arrested. Later, she was fined $400 and was banned from Walmart for two years.

Long before the TLC fame, Amy had a run-in with the law. In a 2017 YouTube video, she chronicled her arrest saying her misdeed was a big mistake. Admittedly, Amy tried to shoplift a book from a Walmart store. Once caught, she denied any wrongdoing but ended up in jail for 2 hours.

As reported on entertainment news outlets, Amy Slaton met the love of her life, Michael Halterman, in high school.

The couple dated each other for several years until they tied knots in 2019 in Nashville, Tennessee. Amy Slaton and her husband previously eloped before they had an actual wedding.

As it comes naturally, Amy had desires of having a baby with her husband. And this alone kept her motivated to lose weight as it was risky while being overweight.

However, they became ready to have a second wedding for TLC so the show also had her going for wedding dress shopping in one of the episodes. She had trouble finding the perfect fit but ended up ordering online because of the reason.

Sadly, Amy’s mother boycotted the wedding and refused to walk her down the aisle. She recommended Frank or her cousin to do the job for her.

Nevertheless, the Slaton sisters decided to have a bachelorette party and invited Michael’s sister to the event. They visited a wine tasting place and later invited strippers to spice up the party.