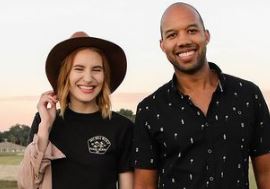 Circa early-Jan 2021, online outlets began reporting influencer Cheyann Shaw passed away. In 2016, she was diagnosed with stage 4 ovarian cancer.

In this Cheyann Shaw wiki, read about the late influencer’s husband, kids, and family background. Furthermore, find out who she was!

At age 27, Cheyann Shaw passed away. As stated above, she died following four and a half years-long battle with ovarian cancer.

On 4th January 2021, Cheyann’s IG post confirmed her death. It began, “With heavy hearts, we are sad to announce that our beautiful girl Cheyann has been called home to heaven”.

The post concluded, “Thank you all for your support and encouragement over the years. If there’s one thing Cheyann taught us is that no matter what battles we face, we can always find a reason to smile through them”.

Also, the post included a statement from Cheyann’s mother, Darci. The heartbreaking message read, “My heart is breaking today, our baby girl lost her long battle with ovarian cancer. She fought until the bitter end. She is a true warrior and survivor”.

Darci then added, “She will be truly missed and will forever be in my heart”.

Shortly after the diagnosis, Cheyann spoke to PEOPLE and declared she wasn’t going to let her ovarian cancer win. Moreover, she admitted the initial fear went away quickly.

Following chemotherapy, in 2016, Cheyann underwent a five-and-a-half-hour surgery. The doctors performed a full hysterectomy on her.

By 2017, Chenyann shared there wasn’t cancer in her body. For the next 2-and-a-half-years, Cheyann continued providing updates on her health.

Cancer would eventually return. A day after her 27th birthday, Chenyann revealed there was cancer in 4 of her lymph nodes. To everyone’s surprise, Chenyann shared the same enthusiasm as she did before on fighting cancer.

In March 2020, Chenyann underwent another round of chemotherapy. Her last post arrived in December that year, sharing a photo from her hospital bed.

Confirming her death via Instagram, Cheyann Shaw’s husband, Kaleb Shaw shared a heartbreaking message. It read, “My heart is broken. I can’t imagine my life without her. I know she is in a better place away from the pain and suffering that comes with dealing with cancer”.

According to Kaleb, Cheyann was his hero and best friend. He also asked everyone to keep the Shaw family in their prayers.

Cheyann’s husband, Kaleb Shaw is an Orlando-based real estate agent. As of Jan 2021, he worked for Robert Slack LLC. It was around 2015 that he began buying and selling real estate properties. He is available on both Instagram and YouTube. In Feb 2020, Kaleb turned 39 years of age.

With her battle with cancer, Cheyann and Kaleb never had an open window to have kids. However, many assumed the married had discussed starting a family someday.

In September 2016, Cheyann and Kaleb were all set to tie the knot. Their world came crashing weeks before the wedding after Cheyann received a cancer diagnosis. They had begun dating in 2013. At the time, Cheyann was 20.

Cheyann Shaw was born in January 1993 with Capricorn as his zodiac sign. On her 27th birthday, her husband penned a heartwarming message.

Besides Kaleb, Cheyann was survived by her mother Darci Clark. Darci launched a Go Fund Me campaign shortly after her cancer diagnosis.

What’s more, Cheyann’s Facebook profile listed Holli Clark as her step-mother. Thus, many believed her parents were no longer together.

Cheyann’s FB, however, didn’t mention any siblings. That said, she may have 2 step-sisters and a brother.

Cheyann Shaw stood at 5 feet 5 inches in height. Before cancer hit, she worked hard for about 2 years to achieve her dream body. Also, Cheyann had several tattoos including the one above her left chest.