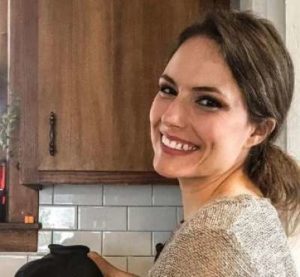 Emily Mitchell’s family never expected to meet with such intense grief just when the pandemic year was over. Just like everyone they had anticipated 2021 to be a good ride. Instead, the family now mourns the untimely demise of Emily Mitchell and her unborn child.

Influencer Emily Mitchell Cause Of Death

Emily Mitchell died three days before Christmas while pregnant with her fifth child.

A GoFundMe set up for her family explained, she was having coffee and breakfast on the morning of December 22 when she “suddenly became unresponsive”. And though her husband, Joseph, and other family members did their best to help until the emergency personnel arrived, the mother and the unborn baby could not be saved.

At the time, her cause of death was not publicly revealed. The GoFundMe said (on Dec. 24) that the doctors were still working on answers for her family.

An update on her fundraising page finally revealed her cause of death. It read— “A few days ago we learned from the state Medical Examiners Office that the official cause of death was a pulmonary embolism. Although it is challenging to wrap our heads around how this could have happened, we know all first responders and medical personnel did everything they could to help, and therefore we are certain that it was simply her time; the Lord was calling her home.”

Her Go Fund Me, Obituary

Emily Mitchell’s Obituary on legacy.com read her as,

“loving wife, mother, daughter, and sister passed into her Savior’s arms unexpectedly along with her unborn child, Joey, at The Westerly Hospital on Tuesday, December 22, 2020.”

Concludingly, they wrote, the services to happen were respectfully private due to the COVID-19 pandemic. Also to support Emily’s husband Joe and the children, her friends had organized a Go Fund Me page, which had raised more than $143,500 as of the Dec. 31 afternoon.

Aged 36, before she passed on, she is survived by her parents Dr. Joseph and Gail Giancaspro of Westerly, and three siblings Joseph Giancaspro, Michael Giancaspro, and Jessica Giancaspro.

Like her family, Emily continued living in her hometown of Westerly, Rhode Island, in the United States until she breathed her last air.

Speaking of education, Emily had a degree in Psychology and Music. Facebook revealed, she studied Psychology at Rhode Island College
Psychology and before that, she attended Westerly Junior-Senior High School.

Emily’s followers were only getting bigger in numbers, with 157k followers already (as of Jan. 2, 2021).

Mostly her contents on social media were what she felt like sharing as a “Rooted in Jesus” Christian, a mother of four kids, and from the perspective of someone living in a farmhouse. Although the self-employed Instagram influencer was not active on the rest of the platforms including YouTube, Facebook, and Twitter.

Emily as we all remember was the creator of The Hidden Way Instagram page and a blog of the same name.

She was a popular blogger documenting her faith and family. To name a few, the parenting influencer inscribed writings under the topics ‘RAISING KIND KIDS: 5 THINGS YOU NEED TO DO, 8 WAYS To Occupy Your Toddler While Homeschooling, Ten Ways To Cultivate a Wonder-filled Childhood.

Before she died, Emily had promised her people she would be documenting more of her family life and her fifth-time becoming a mother experience.

Not to mention, she was also a talented musician, singer, recording artist, and music teacher.

Emily Mitchell and her husband Joseph had been married since July 19, 2007. It must have been devastating for Joseph who was left alone to parent their four young kids Finn, Isla, Eden, and Luna (three daughters and a son).

Clearly, Emily was the foundation of everyone’s life, keeping together the family happy and sound.

Had the next one in line been born, he/she would have been named Joey.

“Thirteen weeks tomorrow — sleeping like a legit fat and furry hibernating bear (read into that what you will lol), sniffing peppermint like it’s my job, craving thanksgiving leftovers, and finding out boy or girl possibly THIS WEEK,” she wrote. “Should I try those old wives gender tests in stories??? I’m thinking I may need to…⁣” 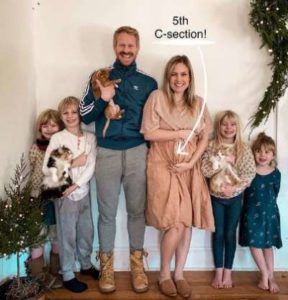 The last time the family was spotted together was on Dec.9, 2020’s Instagram post shared by Emily herself. On the occasion, she meant to say that she would be delivering her fifth baby via cesarean section, which would have been the fifth time she underwent the operation.

So a month before on Nov 20, she had first surprised her followers with the baby news. The picture she posted then on Instagram, showed her holding an ultrasound while seated next to her husband. “11 weeks 2 days and counting😍😍”, she had captioned the joyous words.

At the time, it seemed Joseph who was regularly appearing on Emily’s social media did not have any profile of his own. All one knew was– he was a public school teacher.