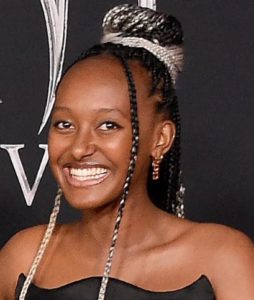 It’s many people’s wish to be born as any celebrity’s kids. But, not all people can have that as reality. Zahara Jolie-Pitt, though, is fortunate enough to be living with her A-Listed Hollywood actor parents, Angelina Jolie and Brad Pitt.

In the article below, get to learn about how Zahara went on a journey from being an orphan to being the daughter of Brad Pitt and Angelina. Along the way, gain insight on Zahara’s journey through surgery, her friendship with Stranger Things‘ starlet, Millie Bobby Brown.

Zahara Jolie-Pitt was born in the year 2005, making her age 15 as of June 2020. She celebrates her birthday on the 8th of January every year.

Zahara is Angelina Jolie and Brad Pitt’s eldest daughter and their second adopted child. She was born in the city of Awasa in Ethiopia as Yemsrach.

The eldest daughter of Jolie-Pitt was adopted by Angelina — who was not engaged to Brad at the time — when she was only 6 months old.

For some time being, neither Angelina nor Brad had confirmed their relationship with Zahara. But, in 2006, when Brad and Jennifer Aniston were officially divorced, Angelina announced that she was pregnant with Brad’s child.

Later, when the expected child, Shiloh, was born, the pair officially accepted Zahara as their child too.

Until years before, there was no confirmed story as to how Angelina found Zahara. For a long time, it was believed that the baby was an AIDS orphan. Moreover, Zahara’s biological grandmother, too, gave testimony on the fact that Zahara lost her parents to HIV/AIDS.

However, when Zahara’s biological mother, Mentewab Dawit Lebiso showed up, all the rumors behind the adoption cleared up.

Zahara’s parents are both Hollywood’s biggest celebrities; they met each other on the set of Mr. and Mrs. Smith and quickly fell for each other. As we all know it, the rest is history.

While Jolie is famous for her roles in Maleficent, Kung Fu Panda, and Girl, Interrupted, Brad is popular for his iconic roles in Fight Club, Seven, Once Upon A Time In Hollywood, among others.

Combined, Zahara is one of Jolie-Pitt’s six children. Zahara’s older brother, Maddox, is an adopted one and he turned 19 in 2020. He is currently pursuing his undergraduate study at South Korea’s Yonsei University.

All other 4 Jolie-Pitt’s kids are younger than Zahara. Pax, aged 15, acted alongside Angelina and Zahara in Maleficent. Shiloh was the first biological child to come out of Jolie-Pitt. Later, they had twins, Knox and Vivienne.

Zahara looks very beautiful at her most natural. She stands at an average height of 5 feet 6 inches (1.67 meters) and weighs around 55 kilograms. Any other distinct features about her aren’t available on the Internet.

Like other Jolie-Pitt’s children, Zahara is supposed to be homeschooled until her high school would end.

At the age of 15, Zahara quite frankly has done work beyond what is expected of her. Zahara had an uncredited role in 2014 dark fantasy movie, Maleficent.

Zahara even voiced the character named Meng Meng in the anime Kung Fu Panda 3. Furthermore, she made an appearance in the episode titled 20 Cutest Celebrity Babies of the TV show VH1: All Access.

Zahara is too young to have her net worth. But, money should never have been a problem in her past as she comes from one of the richest families in Hollywood. Her parents’ combined net worth is supposed to be around $400 million.

In March 2020, it surfaced out that Angelina’s two daughters, Zahara and Shiloh, went under some surgery.

Shiloh went through a hip surgery which can be even found out looking at some post-surgery family photos. However, in the case of Zahara, any specifics are yet to surface.

As it turns out, Zahara is a close friend with Netflix‘s starlet Millie Bobby Brown. On June 8, 2019, on the occasion of National Best Friend Day, Millie shared a photo with her best friends that included Jolie-Pitt’s two kids, Zahara and Shiloh.

These pals even made headlines for hanging out together in Los Angeles city with Brown’s mother Kelly to accompany them. 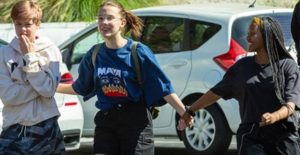 Zahara hangs out with Millie and Shiloh.

The two got enough time to understand each other all along. Millie even attended Zahara’s birthday party at Jolie-Pitt’s residence.

Since then, the pair have been spotted out on multiple occasions, which, if anything, helped them get more close toward each other.