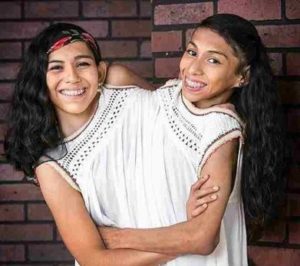 Do you ever look at your sibling and think how lucky you are to have them? And together through joys and sorrows, you wish you could share every moment with them.

Yes! living the dream, Carmen and Lupita Andrade are two sisters blessed with the same body. The conjoined twins, came to limelight as they were featured in TLC’s Extraordinary People: Conjoined Twins: Inseparable. The documentary aired the network on July 16, 2020, and had viewers intrigued on the different life aspects the twins shared.

Here we are to let you in on the insides of Carmen and Lupita Andrade thought this short wiki-style article. Moreover, get to know about what they are doing now and their dating life as the article proceeds.

Celebrating their birthday on June 5, Carmen and Lupita Andrade turned 20 years of age in 2020. Also, they share a Gemini zodiac.

As for their personalities, the girls have a great sense of humor and are often cracking jokes. They state that the jokes are how they deal with the stares and strange inquiries. Trying not to let it bother them, the girls just opens up the sky with their laughter.

Apart from this, the twins do have their clothes custom-fitted to their shape. As a child, their mother would buy two shirts and have a seamstress sew them into a single garment.

Reportedly, Carmen and Lupita have an extended family. They have an older sister named Abby.

Also – Rooney And Kate Mara: Who Are The Mara Sisters? All Info

Carmen and Lupita Andrade were born to their parents — Norma Solis (mother) and Victor Andrade (father)  in Veracruz, Mexico.

Their mother knew that she was carrying twins early on in her pregnancy. But it was in the 5th month of her pregnancy, Norma found out that her babies were conjoined.

The parents didn’t believe at first that their babies were conjoined and sought for a second and their opinion. After the twins were born, their mother wasn’t allowed to see them. The doctors believed that the duo had less chance of survival and would probably live for three days.

Carmen confessed that they almost received their last rites. She added

“Their prognosis was if we did get separated, we’d either have to be in the ICU for the rest of our lives, or we wouldn’t make it through the surgery,”

In hopes of better medical guidance, the family later moved to Connecticut, US. However, the doctors once again told them that the girls could not be separated. Their treatment was under review by medical experts.

As for their anatomy, they have separate torsos and arms while the rest of the body is shared. Their spines come together near their pelvis. They each have their own heart and lungs but they share a reproductive system, digestive system, liver, and bloodstream.

Furthermore, each twin controls one leg, so being in sync was the key. Carmen controlled the right leg while Lupita controlled the other. They learned to walk at a later age after getting help in physical therapy.

Also, Lupita was dealing with scoliosis, which was starting to affect her lungs.

As for their distinct features, Carmen is a bit taller than Lupita. Also, Lupita’s voice is was a bit minion-ish and Carmen spoke normally.

As of July 2020, Carmen and Lupita each had their own Instagram account — Carmen @mdcarmen_andrades had over 7.1K followers while Lupita @andrade_glupe had over 5.8K followers.

Furthermore, find Carmen on Facebook @Carmen Andrade. Also, the duo had a Youtube channel @Carmen and Lupita where they shared their vlogs.

You may like – Eustace Conway Wife, Married, Dead Or Alive, Net Worth, Now

As of now, Carmen and Lupita are set to graduate in 2021. On the show, they were seen pursuing their goal of working in livestock management and starting their education at community college in a vet tech program. They want to pursue a career in agriculture and be herd managers at a dairy farm.

But in 2020, their family feared that they will be denied a renewal of the visa that allowed them to stay in the United States. Previously, they came to the US under a program called “deferred action for medical arrivals.”

Although they wanted to apply for permanent status, there was no path to a green card from a medical visa. Furthermore, they had to reapply for their status every year for their extended stay.

So what about their dating life? Many are curious about how the conjoined twins manage their relationship’s intimacy as their lower half is the same.

As of 2020, Carmen and Lupita shed no light on how they will take a boyfriend. While many recommended that online dating was a thing, the sisters were looking for a way to work things out.

Also, they confessed that they weren’t interested in girls, either.

At the end – Ekaterina Alexandrovskaya Boyfriend, Illness, Parents, Net Worth