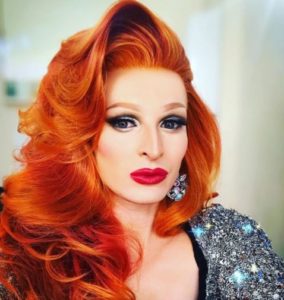 Veronica Green is a drag queen out of Lancashire, England. In 2020, she had to quit RuPaul’s Drag Race UK in the middle of it.

Learn more about her with this Veronica Green Wiki where we cover details on Drag Race UK stint, real name, family, and partner.

After getting eliminated from season 2 of RuPaul’s Drage Race UK, Veronica returned the following season. In her first season, Veronica was loved by fans and even made it to the top 9. She returned with fresh new outlooks on life and was cheerful enough to steal the hearts of the fans of the hit show once again.

Veronica Green was born in her hometown Rochdale, Lancashire, England. Her parents are definitely her biggest support when she chose the career as a drag queen. However, besides a few snaps of her parents on her Facebook, no precise information on her folks made it to the public attention. This included their names and their occupations.

Besides her parents, Veronica has a brother named Frances Grogan and a sister named Veronica Grogan. In fact, Veronica created her drag name based on her sister. According to Veronica, she and her brother as a little boy used to make their own comics. And when the sister came into their life, they became jealous and created a supervillain in their comic books named Veronica Green.

On Instagram, Veronica Green uses her handle name (@veronicaqween). She entertained her followers with 170 followers as of Aug 2021. She uses her real name on Facebook which hasn’t been updated since February 2020.

Veronica Green, the drag queen persona of Kevin Max Grogan is a supervillain. As proclaimed, she is a Gollum to Gorgeous. She is a singer, actor, and performer. She has a YouTube channel name Veronica Green with 1.5k subscribers where she posted 8 videos on her YouTube.

As an actor, Veronica has performed in three short films Other Man, #Human, and Hold Hands or Hide. Let alone her makeup character creation skills, she is a pure artist and an entertainer.

Veronica made her debut in season 2 of Rupaul’s Drag Race. But, due to the worldwide pandemic, she also couldn’t protect herself from contracting the COVID-19 virus. So, she had to quit the show in the middle of it when she was placed 9th.

At the time, Veronica had become a strong contender. She also had scored her first Ru Peter badge. Veronica cried until she was numb and didn’t knew how to process the information and had believed it was over for her.

When Veronica was having the time of her life before COVID-19, her life changed when she returned home. At one point, she was jobless and had no income after all of her gigs were canceled. So, Veronica struggled with rent.

Veronica then ended up shutting out her family and friends and didn’t leave her house for twelve weeks. Most of the time, she confined herself in her bedroom. She didn’t leave other than to use the bathroom or to occasionally make herself a cup of tea or some food.

The Lancashire lass also appeared on BBC’s talent show All Together Now. She has been pursuing a career as a professional actor and singer for over 15 years. So, her performance is all about live vocals and she even performs opera.

On her two runway looks, Veronica dressed as Lancashire Rose which impressed the judges as well as the fans. Now, Veronica is making money with shows as the lockdown is over. She also focused on making money by selling marches with her logo on them. She has an estimated net worth of under $100 thousand.

Veronica Green Partner: Is She Married Or Still Dating?

Veronica shared that she was wearing her dress when she had one of her first Christmas dinners with her then-boyfriend. They must’ve dated for at least 2 years and now her boyfriend has become her fiance.

During the time of pandemic when Veronica cut off contacts from her family, it was her fiance who got her back to her life and cheered her once again. But, she hasn’t revealed information on her fiance as of Aug 2021. Plus, her social media didn’t share anything about her to-be life partner.