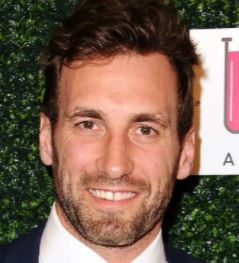 Jarret Stoll is a Canadian professional ice-hockey player who has played in the National Hockey League for New York Rangers, Los Angeles Kings, Minnesota Wild, and Edmonton Oilers. As much fame as he has gained from Hockey, Jarret has gotten almost equal fame through his relationship with the legendary rockstar Rod Stewart’s ex-wife, Rachel Hunter.

Find out the details of Jarret Stoll’s life, including his relationship with Rachel Hunter, and of course the question of who is Rachel Hunter exactly, in the article below.

Well, technically no, Rachel Hunter was never Jarret Stoll’s wife. And so, she is not his ex-wife. Rachel and Jarret never really got married.

Of course, Rachel and Jarret were engaged to be married in 2009. They had gotten engaged in August 2008 and the wedding was scheduled to happen in August 2009. However, two months before the wedding, in June 2009, Jarret called off the wedding.

Rachel later admitted that the age difference might have been the reason behind their separation. There was a 12-year age difference between Jarret and Rachel. At the time of their relationship, Rachel was 39 years of age and Jarret was 27.

Who Is Rachel Hunter?

Rachel Hunter is a supermodel and actress from New Zealand, who was most famous as the ex-wife of legendary singer-songwriter Rod Stewart. Rachel is one of the three wives and eight partners of Rod Stewart. She was married to Rod for 16 years from 1990 to 2006.

Rod Stewart might have a large fanbase but he also has a large family. He has three wives (officially married), five other well-known partners (not married), eight children, and one grandchild. Recently, his two ex-wives, Rachel Hunter and Alana Stewart got together with their own children for a larger family get-together.

As an actress, Rachel has 45 credits, the most famous ones being The Benchwarmers (2006), Rock Star (2001), Dead Write (2007), etc. And as a model, she has appeared on the covers of Cosmopolitan, Sports Illustrated, Vogue Italia, Elle, Harper’s Bazaar, etc. She also posed nude for Playboy in 2004.

Jarret Stoll And Erin Andrews: Wedding, Any Kids Yet?

Currently, Jarret is married to Erin Andrews. They had their wedding on 24 June 2017 in front of their friends and family. The wedding was a small and intimate affair with only the people closest to them present there. The wedding was planned by Yifat Oren, the celebrity wedding planner.

In the four years since the wedding, Jarret and Erin did not have any kids. In fact, Erin suffered from cervical cancer and survived. She found out about cancer during one of her annual visits to her gynecologist. It was a shock to her because there was no history of cancer in the family.

Fortunately, the cancer was diagnosed at an early stage and so they could opt for a less aggressive approach to the medication. She went through surgery to remove cancer. However, Erin and Jarret also decided to freeze the embryos in case the surgery did not work out. ‘What if we have to get a surrogate and I’m not pregnant for our baby shower?’ Erin recalls her fears about cancer affecting her ability to have kids. 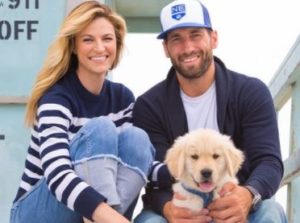 Jarret Stoll with his wife Erin Andrews and their dog Howie circa March 2020 (PC: Erin’s IG)

Jarret Stoll Job: What Does He Do Now?

Currently, Jarret Stoll is working as a talent scout for Los Angeles Kings‘s Player Development program, after having stopped playing since 2016. He never actually announced his retirement.

Jarret started to play in the Western Hockey League for Kootenay Ice in the 1997-98 season. About five years later, in the 2002-03 season, he started his professional career with Edmonton Oilers. He later went on to play for the bigger National Hockey League teams like Los Angeles Kings, New York Rangers, and Minnesota Wild.

According to hockeyzoneplus.com, Jarret Stoll made a $28 million total fortune from his almost a decade and a half in NHL. That means, he might still have a net worth of about $10 million.

Jarrett Stoll is a very tall guy with a height of 6 ft and 1 inch. Furthermore, he has a very athletic body, what with being a sportsman. Also, he has dark hair, brown eyes, and an elongated face.

One Reply to “Is Rachel Hunter Jarret Stoll’s Ex-Wife?”