Home EntertainmentTyler Herro Girlfriend & Dating History: All That We Know

Tyler Herro Girlfriend & Dating History: All That We Know 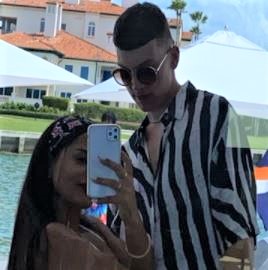 The Miami Heat’s point guard, Tyler Herro was on the spotlight in September 2020 as the news about his breakup with Katya Elise Henry surfaced.

While many were even unaware when the duo started dating, the talk about their break up startled the fans. But worry not, as we are here letting you in on the dating history of Tyler Herro.

As for his education, he studied communications at the University of Kentucky.

Trivia: Tyler had a hobby for fashion and photography, apart from basketball.

It was the 3rd week of March 2020 when Tyler Herro first tweeted to future girlfriend Katya Elise Henry “wyd”.

Yes, making a bold move, Tyler publicly reached out to Katya over Twitter. And to which Katya responded with “quarantine and chill?” with the smirking face emoji at the end.

After a month of the flirty exchange, Katya asked her fans what she should do on Thursday; as a fan suggested Tyler and tagged his Twitter account. To which she replied,

And a few hours later, Tyler had liked the tweet. So, they might have already started dating by then.

Soon, the duo was spotted hanging out on a few occasions. Also, they both went on a march together to protest and support the Black Lives Matter movement.

Moreover, they even referred to each other as “bae” over social media; supporting the fact that Katya was already Tyler’s girlfriend by then.

Furthermore, on 1st June 2020, Katya took it to Twitter and wrote,

“fell in love with a real one”

However, neither of them clarified their relationship nor how it began.

Apart from this, while most of Tyler fans praised him for “shooting his shot”, some criticized him for being a “thirsty man”.

You may know – Brighton Reinhardt Wiki: Girlfriend, Height, Net Worth

Katya Elise Henry is a fitness model and influencer from Minneapolis, Minnesota, who flaunted 7.6M followers (in 2020) on her Instagram @katyaelisehenry.

Also, she is the founder of the program, Workouts by Katya.

Before Tyler, Katya dated the Los Angeles Lakers star, Kyle Kuzma until they broke up in April 2019. According to Katya, the duo broke up because Kyle “couldn’t handle her”.

Could this be just a coincidence? Or was some competitive factor playing a role there? Guess we’ll never know.

Moving on to her dating life, and before Kyle, Katya was in a relationship with American singer Austin Mahone. Reportedly, the couple broke up in early 2017.

As of September 2020, the answer to that question would be “no”. No, Tyler Herro and Katya Elise Henry were not dating.

Moreover, the duo had deleted their social media posts related to one another as well.

However, Tyler and Katya didn’t publicly confirm the end of their relationship. So, could this be a temporary dispute? but then again the couple never confirmed the start of their dating as well.

Guess we’ll just have to wait and see what’s to become of the lovebirds. It would be a heartbreak to many fans if the duo doesn’t get back together.

Tyler loved her and wasn’t afraid to show it either. He supported her and even replied to some of the fan’s disrespectful comments.

Once, a fan commented on Katya’s posts asking if she had an OnlyFans account. The question was offensive as the platform is well known to share nude pics and videos but Tyler was there to save the day.

A perfect way to shut down all the perverts.

Before you leave – Booboo Stewart Sisters: Who Are They? What Do They Do?

Dallas Maverick’s player Luka Dončić and his girlfriend Anamaria Goltes have been building their...

0 Replies to “Tyler Herro Girlfriend & Dating History: All That We Know”