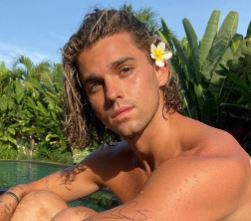 In Dec 2020, the social media influencer, Jay Alvarrez sparked a fire with a leaked sex tape featuring him and the female Russian model, Sveta Bilyalova.

Fans who believed that Jay Alvarrez was gay were stunned to hear the news. Also, they were curious about his dating history and sexual preferences. So, here we are shedding light on his personal life over this article.

He celebrates his birthday on July 5 and justifies the intuitive and caring nature of the Cancer zodiac.

Born and raised in Oahu, Hawaii, Jay Alvarrez spent his childhood along the coastline and ocean.

We could say he had a happy life until he unexpectedly lost his mother at the age of 14. Losing one of his parents, Jay took some time to heal.

Also, there was a picture of Jay alongside his parents over the fan blog “jayalvarreznation.tumblr.com.” The young Jay couldn’t look any sexier than he is today.

Information on his siblings wasn’t available.

Read Another: Tyler Herro Girlfriend & Dating History: All That We Know

Mentioning his distinct features, Jay has brown hair and grey eye color. Also, he was a fan of tattoos. He tattooed his mantra “Let’s Live” inside his lower lip (talk about the pain he must have endured, Ouch!). We could see a palm tree with the phrase “dream world” above and the word “Isle” below it at the left inner forearm.

Furthermore, he got a tattoo “Fantasy > Reality” on the side of his right forearm and the phrase “They say I’m going crazy but it keeps me from going insane” on the inside. On the left ankle, he tattooed the sentence “Never be insecure of your creativity” and “Made by heaven” on his left forearm.

Reportedly, he earned $22,100 per post over this social media. As per “inc.com”, he raked more than $1.6M in earnings from YouTube payouts and brand sponsorships alone.

Jay is a leading “sexy travel vlogger”. He was also one of the pioneers to jump into the travel influencing world alongside his partner at the time, Alexis Ren. Best known for videos traveling to over-the-top, luxurious destinations, Jay enjoys surfing, skydiving, and photography when he’s not working.

And as handsome as he is, Jay has also modeled for some big names like Bond swimwear, Calvin Klein, Express, and Ralph Lauren.

Also, he sold his merch, mostly travel bags at “douchebags.com”. It featured bags ranging anywhere from 179€ to 2500€.

Did you know: Jay was sponsored by Dubai and the United Arab Emirates for a video where he bragged about the blank-check budget he was offered. Though he never confessed to the sponsorship, fans soon figured out the truth. Facing the backlash, Jay decided to sell his $110,000 tricked-out Mercedes SUV and move from L.A. to redeem himself.

Though there might be rumors circling about his sexuality, Jay’s dating history and mostly the “sex-tape” should be enough to convince the dissenters.

Welcome to the timeline of Jay Alvarrez’s dating history. His romances are listed starting from the bottom.

Chaser Miller: Jay’s first known girlfriend was the model, Chaser Miller. She was popular for her modeling career and worked with the brand Brandy Melville. Also, she garnered around 50k followers on Instagram. The duo first met in Hawaii and their relationship ended before we knew it.

Alexis Ren: Jay’s travel partner/ex-lover, Alexis Ren (model) might be the most popular among the girls, Jay’s dated. Reportedly, the lovebirds bonded over their grief following the deaths of their mothers. Fans rooted for them and they looked like a perfect couple; until their ugly split in 2016 after 2 years of dating.

After the breakup, Alexis tweeted about her health issues and claimed that she was in a “toxic state of mind, suffered from food guilt, and would overexercise as a way to punish herself.” — all the while traveling with Jay. Also, she shared, “I tried to replace (my mom) with another person, which obviously doesn’t work out.” But as of now, she was the “healthiest she’s ever been.”

Trivia: Jay tattooed, “Never be insecure of your creativity” after breaking up with Alexis in May 2017.

Tana Mongeau: Though Jay and Tana never dated publicly, rumors had that they were romantically involved with each other in 2018. Tana is a social media influencer with over 5.6M followers over Instagram and 5.44M subscribers over Youtube.

Valentina Fradegrada: Jay started dating the Italian-born fashion blogger, Valentina Fradegrada in 2019 and their relationship came with a bang! Jay took it to his Instagram to post a nude photo of himself and Valentina captioned, “bang her on every piece of furniture in his house.” But after fans were disgusted with his post, Jay had to the picture.

“Can’t believe it’s been three years since you been on this earth.. that trip to Moscow, Russia was wild an not expected.. but, at least I was given you my son!!! HAPPY BIRTHDAY МАЛЫШ COSMO АЛВАРЕЗ!!! I will return to russia and see you soon!!!”

However, only his fans knew about the real case.