Home EntertainmentBooboo Stewart Sisters: Who Are They? What Do They Do?

Booboo Stewart Sisters: Who Are They? What Do They Do? 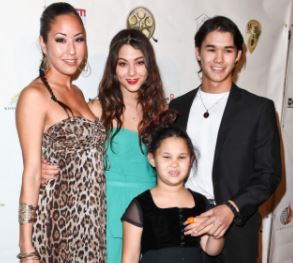 The Stewart family of California was a multi-ethnic, multi-talented family. The Stewart parents set their first foot on Hollywood and now the younger Stewart siblings, especially Booboo Stewart, are conquering it.

Read the article below to know more about Hollywood’s emerging actor Booboo Stewart, his equally talented sisters, and his parents.

Who Is Booboo Stewart?

Booboo Stewart was, as of now, the most famous of the Stewart siblings. His real name was Nils Allen Stewart Jr., and he was born on 21 January 1994.

Booboo started his career as an actor in small-scale indie movies. In the early days, he also did stunt work for a few mainstream movies. Moreover, he hosted six episodes of Blue Dolphin Kids, a children’s show in Hawaii. His most important pre-fame achievement was touring with Miley Cyrus on her Best of Both Worlds Tour.

In 2010, Stewart made his big theatrical debut with Logan. However, it was his part in The Twilight Saga: Eclipse that brought him widespread fame. His other popular performances were in Running Deer, X-Men: Days of Future Past, and the Descendants series.

Booboo Stewart Sisters: Who Are They?

While Booboo might be the most famous of the Stewart siblings, the others were no less talented. Booboo had three sisters: one older sister Maegan and two younger sisters Fivel and Sage.

Maegan was the oldest of the Stewart siblings. While Maegan had been part of more movies than any of her siblings, she was mostly a stunt performer, not an actor. Thus, she was also among the least famous of Stewart brothers and sisters.

The biggest movies on her resumes were Koreatown, Wristcutters: A Love Story, Hansel & Gretel: Warriors of Witchcraft. In the latter movie, she worked as the stunt double of her own sister, Fivel. Maegan had also performed in a band called The Stewart Clan with her brother Booboo and sister Fivel.

The second of the Stewart sister, Fivel, was also famous, more than her sisters, less than her brother. Fivel was born on 4 November 1996 in Beverly Hills and her zodiac sign was Scorpio.

She started to work as a musician from the young age of 7. At that time she had a band called My Allowance and she was the lead singer. She toured with the big names of the music industry like Demi Lovato, Mitchel Musso, etc. At a later age, she also worked as the lead singer of the band 5L, in which her brother Booboo played guitar.

Fivel also made her acting debut very early on when she was only 8 years of age. Dante’s Cove was her first big role, in which she played Betty. In 2013, she played Ella in Hansel & Gretel: Warriors of Witchcraft, which remained one of her most famous roles. Another significant role was as a series regular in Netflix‘s Atypical.

On the personal front, Fivel was dating Andrew Kai. Andrew and Fivel had been boyfriend and girlfriend for quite a while now. While it was not known, when they started dating the pictures of them together on Fivel’s IG goes back to 2018.

Fivel stood at a height of 5 ft 5 inches.

The youngest of the Stewart siblings was Sage Stewart. Born on 14 November 2005, Sage’s zodiac sign was Scorpio, just like her sister Fivel. Sage shares the traits of both of her sisters. Like Maegan, she was also a stunt performer. And like Fivel, she was also an actress.

She was only 14 years of age, and she had already 6 stunt credits and 11 acting credits. She performed stunts for shows like Paradise City and movies like The Never List, Cucuy: The Boogeyman. As an actor, she worked in movies like The Tales of Halloween, American Satan, The Sandman, etc.

Stewart Siblings: Who Do They Call Parents?

Finally, about the parents who set the launchpad for their young uns. The parents of Booboo, Maegan, Fivel, and Sage were Renee Steward and Nils Allen Stewart Sr.

Nils Allen was a famous stunt actor who had worked in movies like Space Cowboys, The Mask, Planet of the Apes, Daredevil, as well as the TV shows like Reno 911!, Dante’s Cove, Into the Dark, etc.

Renee, on the other hand, was an actress and producer. As an actor, she had worked on movies like Raw Target, Warrior of Justice, Faultline, etc. She had also produced a 2013 movie short, Freeze.

While Nils came from parents with Russian, Scottish, and a bit of Native American Blackfoot ancestry, Renee came from predominantly Asian ancestry, with Chinese, Korean and Japanese blood.