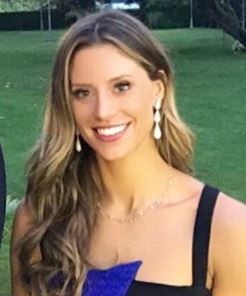 The revelation was made through Instagram as the couple both uploaded the same pictures from the hospital, tagging each other. While Paul, being a basketball star was already in the limelight, his wife, Catherine came as a new interest to his fans.

So, here we are shedding light on the inside of Pau’s wife, Catherine though this wiki-style article.

Corresponding to her birthday, Catherine is of Gemini zodiac.

She shared that her mother was her “best friend” and “best mom in the world”. As for her father, Catherine confessed that she always took him for granted. In her words,

“Since I was little I (ignorantly) assumed that all dads were like you – giving, funny, caring, selfless, cool”.

“As I’ve gotten older, I’ve not only started to appreciate all of your “life lessons” but I’ve also really started to understand how dang lucky I have been all along! So far, I really have never met a single person that comes close to you”.

Furthermore, Catherine’s dad gave the best advice and some of “the best and worst jokes of all time”.

And listening to those jokes were Catherine and her 6 other siblings; which include the realtor, Kelly Griggs, and the entrepreneur, Michael McDonnell.

Reportedly, her brother, Michael won the freshman entrepreneur award and was a leader in his fraternity at UC Berkeley.

As for her nationality, Catherine McDonnell is American.

Also, Catherine shared a piece of advice over her twitter bio. She wrote,

“I’ve found that luck is quite predictable. If you want more luck, take more chances. Be more active. Show up more often.”

Catherine McDonnell’s net worth was estimated to be over $1 million. Also, she was entitled to her husband Paul’s whopping net worth of $65 million.

Talking about her job, Catherine started working in public relations for Singer Associates Public Relations and Public Affairs from May 2007 to Aug 2009. Then she moved on the Sales and Marketing for Showtime Networks Inc for four months.

Furthermore, Catherine also worked as a sports broadcasting reporter for ABC News from and Broadcast Journalist for Fox television from Dec 2010 to Dec 2011.

Moving on, she joined the Innovative Dining Group as a project manager in May 2013 and worked for 1 year and 4 months.

Also, she was the vice president of Guggenheim Partners from Jun 2014 to Jan 2017.

Finally, she joined TESS Research Foundation in Aug 2016 became the Director of Communications. The organization was a charity established to fund research in search of a treatment or cure of Citrate Transporter Disorder (a genetic neurological disorder associated with the gene SLC13A5).

Apart from this, Catherine volunteered for GCSA Guggenheim Mentoring and worked with Autistic children for over a year.

As for her education, Catherine attended the University of Southern California. She has a Bachelor of Arts, Communication, and Business degree with a 3.9 GPA and a Master’s Degree in Business and Communication Management with a 3.85 GPA.

You may like – Sharrieff Shah Wiki: Salary, Net Worth, Age, Job, Jen Shah

Catherine McDonnell and Pau Gasol officially started dating in the summer of 2016. Since Catherine was also dabbled in sports through her job, it’s not hard to imagine how the couple could have met.

Yes, the lovebirds held a next and even more intimate wedding too. They chose the Ampurdan area in the Northeastern region of Spain and held their next wedding almost a week later. 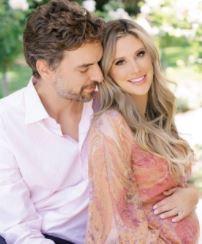 For their first marriage anniversary (July 8, 2020), Pau took it to Instagram to share that they have had a very emotional year and thanked Catherine for being “his rock and by his side the entire time”.

According to Catherine, her kid was born on a “very special day”. She shared that September 10th was her great-grandmother Elizabeth’s 100th birthday and her mom and dad’s 2nd engagement anniversary.

Also, her great-grandmother Elizabeth was a wonderful, stylish, classy woman”. Thus, Catherine and Pau named their kid after her.

As for their baby’s middle name “Gianna “; it was a tribute to Laker’s star, Kobe Bryant, and his 13-year-old daughter, Gianna, who died in a tragic helicopter crash in Jan 2020.

Reportedly, the duo mentioned they chose Vanessa Bryant (Kobe’s widow) to be their daughter’s godmother.