Tyler Brash is a TikTok-star making his way through the TikTok community with his POV videos and comedic skits. He joined TikTok in July 2019 and since he has been creating video content on tutorials, trends, and lifestyle.

The young artist began with the impression videos and went viral after a panini tutorial: that earned up to 58 thousand likes.

As of the article’s published date, Tyler compiled over 632.8 thousand followers on his TikTok account and around 14.9 million likes on his overall TikTok videos.

Tyler Brash, age 20, as of 2019, was born in the year 1999 in the United States. He grew up celebrating his birthday every year on 22nd December — a few days before Christmas and New Year’s celebration; thus making him a Capricon.

Not much was known of Tyler Brash’s early life, family background or education he acquired, as of March 2020.

Although in August 2019, he shared a TikTok with his grandmother. Plus at some point, he shared a video, that eventually went viral, claiming that the YouTube star, David Dobrik was his eighth cousin.

David, meanwhile, is a vlogger from Chicago with a record of over 16 million subscribers on his self-titled channel. He also worked as a judge on Nickelodeon‘s America’s Most Musical Family. As of October 2019, he was reported to have turned his empire into a net worth of $7 million.

Not to mention, Tyler also mentioned his “little” brother in a few of his TikTok videos; even so, he never truly revealed his young sibling’s face on it.

Amidst COVID-19 Coronavirus pandemic, when the whole world could not help but share their panic and concern on social media, Tyler too made a video on “social distancing”. 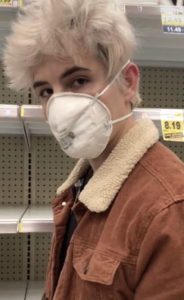 In the short video, titled, “POV Episode 2: My little brother and I are trying to fight off anarchy”, he is seen going to the grocery store to pick up supplies.

Tyler Bash, known for having competed as a wrestler in high school, stands at a height of 5 feet and 6 inches (1.68 meters). Likewise, his weight was reported to be 65 kg (143 pounds), at some time in the past. Although his further measurements remained unreported.

The fine-looking young man, in his athletic-built, no doubt sets the fitness goals among his social media fandom.

Tyler Brash and fellow TikTok star Max Dressler were involved in some kind of social media feud. Tyler blocked Max on social media and the two conversed via Instagram’s Live, about their issues with one another.

In the video, Tyler was explaining to Max — the reason he was hurt; he accused Max of “putting him down” on the app. Max, meanwhile, rebutted that it was all just some joke.

All in all, the enmity did not seem to have entirely sorted, at the moment. Because in a TikTok video that followed afterward, Tyler dedicated a message to his haters and it was:

“All the clowns that think to roast me will stop me…You can’t stop me I’m sorry.”

The words in the video were dedicated to a few names including Max’s.

Tyler Brash had not commented anything on his relationship status, up until March 2020. In case as such, it is likely a trend that his fans would make a few speculations on his dating life. To the extent that there were even some queries in regards to the possibility of his being gay.

However, it is best not to make opinative conclusions until Tyler himself comes up with the announcement of his partner; be it girlfriend or boyfriend.