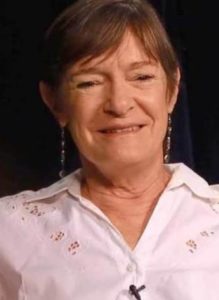 American Horror-flick writer-director Stuart Gordon passed away on 24 March 2020. He has also gained recognition for sci-fi and film noir that was well-received critically. Carolyn Purdy-Gordon, his wife played a huge part throughout his career on a personal and professional level. She went on to star on some of his movies.

This wiki-style article explores the love life, career and personal details on Carolyn, so delve into it.

Carolyn Purdy-Gordon, a Janesville, Wisconsin-native was born on 3 June 1947. She completed 72 years of her age while celebrating her birthday in 2019.

Since Carolyn’s birthday falls on the first week of June, she is Gemini by zodiac sign.

Carolyn Purdy-Gordon was born to Dr. Marshall Purdy as his middle child with his first wife, Carolyn’s mother. She grew up with two siblings, her older sister and a younger brother.

Her father passed away in 2016 at the age of 100 after living a long life serving hundreds of individuals, including WWII.

Besides that, details on her family including her mother have eluded the public eyes.

Together, they went on to found Organic Theatre Company in 1970. She assisted Gordon to write as well as perform their original adaptations of classic work such as Odyssey of Homer and Animal Farm of George Orwell.

Furthermore, Carolyn and Stuart put forth their original production work in Sexual Perversity and Warp!

Besides helping with the production work, she also starred on several movies either written or directed or both by Gordon. The Dolls (1987), Beyond (1986) and Re-Animator (1985) are the movies she had been credited for.

The actress also found the parallel success in the stage performance. She appeared on her self-owned company’s production like Sexual Perversity in Chicago, Bleacher Bums, and Switch Bitch.

Her years-long dedication to the art of theatre performance garnered her Joseph Jefferson Award under the category Actress in a Principal Role in a Play in 1976. Moreover, she sharpened her pen work while writing for Emergency Room (E/R) including the pilot episode.

Carolyn Purdy-Gordon and Stuart Gordon became an item since their days at the University of Wisconsin-Madison where they had attended. The love birds got married in 1968 though they had planned to tie the knots after their graduation.

The couple were taking part in political protests and was extensively involved in theatre and acting classes. She was a dancer in her husband’s avant-garde reproduction of Peter Pan where instead of advancing to Neverland, the character sets out on a psychedelic journey fueled with LSD. 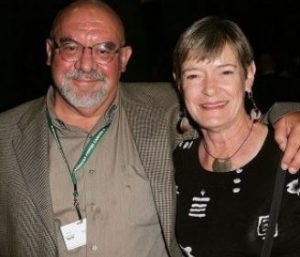 Carolyn and her husband Stuart together (Pic: Globintel.com)

Stuart was warned by local DA to halt the performance regarding the obscenity it possessed. But, he stood up for himself and claimed that his freedom of speech couldn’t be taken as it was an art, he ran the show anyway.

Carolyn along with her then-boyfriend was arrested for obscenity as the news of naked dancers performing in the stage spread like wildfire.

The commotion created tension between Stuary and Carolyn’s father which took years to reconcile it back.

Following the marriage, Carolyn and Stuart had three children, Suzanna, Jillian, and Margaret. More on that, they have four grandchildren living in California.

After the birth of Suzanna, the once-sour relation between Carolyn’s husband and her father reconciled eventually.