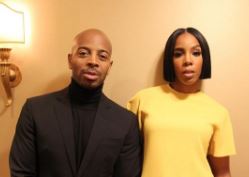 Tim Weatherspoon is an enigma. Not only is he a topic of gossip but also a subject of fascination among the fans of Kelly Rowland — his wife.

This Tim Weatherspoon wiki highlights his net worth, career, and job. Furthermore, it attempts to answer questions about his age, height, and married life with Kelly Rowland.

On 7th January 2021, Tim Weatherspoon became a 47-year-old man. Courtesy of his date of birth, Tim is Capricorn.

Did you know?: Tim is a huge basketball and boxing fan.

Kelly hails from the South. As for Tim, he is a native of St. Louis, Missouri, USA.

According to reports online, Tim Weatherspoon was born to parents: Tommy (father) and Jackie (mother). They had named him Timothy Jon Weatherspoon.

While Tim wished his mom a happy birthday in June, he considered his dad a superhero.

For siblings, Tim had a sister named Dawn Weatherspoon. A mother of multiple kids, Dawn married her husband, Aaron Chisholm, in 2005.

Believe it or not, he is shorter than his wife. At 5 feet 7 inches height, Tim Weatherspoon is an inch shorter than Kelly Rowland, who is 5 feet 8 inches.

To mention his distinct features, Tim sports a bald head. What he lacks in the hair department, the St. Louis-native compensates with an immaculate fashion sense.

Tim, on the other hand, enjoys limited internet clout. By January 2021, some 58 thousand followed him on Instagram.

Contrary to what the google search may tell you, Tim Weatherspoon manages musical acts as a part of his job.

Tim even was Kelly Rowland’s manager before their relationship took a romantic turn.

Judging by his old and new Instagram posts, Tim has deep industry connections. From photos with Common to cozy snaps with Wiz Khalifa, his social media feeds give an insight into his music management career.

As an entrepreneur, Tim incorporated his business “174, Inc” in Miami, Florida, in June 2008. During the filing, he described the company type as “Domestic for Profit”.

According to opencorporates.com, Tim served as the president and agent of “174, Inc”. The publication recognized the company’s head office address as 5959 COLLINS AVE UNIT 604, MIAMI BEACH, FL, 33140.

From his career, Tim Weatherspoon allegedly made above $1 million net worth. Meanwhile, Kelly Rowland flaunts a $12 million fortune.

In 2010, Tim Weatherspoon started dating R&B songstress, Kelly Rowland. For the most part, the pair kept their romance a low-key affair.

Kelly then announced their engagement in December 2013 while appearing on “The Queen Latifah Show”. Moreover, she claimed Tim asked her to marry him on Skype.

On 9th May 2014, Tim and Kelly exchanged wedding vows in a private ceremony. Surrounded by friends & family including Beyonce and Solange Knowles, they got married in Costa Rica.

6 months after tying the knots, Tim became a father for the 1st time. In November 2014, Kelly gave birth to a baby boy named Titan Jewell Weatherspoon.

In 2019, Kelly opened up about having another kid. The “Motivation” hitmaker claimed their son kept asking them for a sibling. October that year, divorce rumors gained traction after paparazzi spotted Kelly without her wedding band on multiple occasions.

Putting the divorce rumors to bed, Kelly uploaded an anniversary post on Instagram in May 2020. That very month, she spoke to PEOPLE and shared they kept things fresh by spicing things in bed through role-playing.

In October 2020, Kelly announced they were expecting their second child. Also, she revealed their second bundle of joy was also going to be a boy. Talking to Women’s Health, Kelly admitted COVID played a part in the duo’s decision to expand their family.