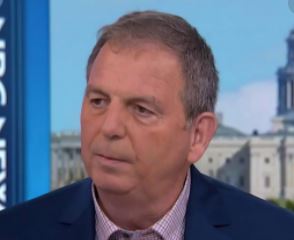 Imagine being married to someone for years and even having kids, only to find out that your spouse was secretly gay all along. Unfortunately, this was the case for John Weaver’s wife, Angela Hession — a former Rudy Giuliani aide.

It was Jan 2021, when The Lincoln Project’s co-founder, John Weaver confessed that he was gay. However, the confession wasn’t voluntary. John was opted to share his secret after the news about him sending “sexually suggestive messages to at least 30 young men” blew up over the media.

Along with the revelation, John also apologized to the men he made feel “uncomfortable”. But The Lincoln Project was unforgiving towards John. They released an official statement sharing that John was released from his duties and labeled him as “a predator, a liar, and an abuser.” Moreover, the team expressed that they were saddened, and felt “betrayed and deceived” by John’s misdeed.

Meanwhile, as the hate on John kept snowballing, the queries about his wife and married life intrigued many. So, here we are shedding light on John’s wife, Angela Hession over this wiki.

As per her birthday, Angela is of the Taurus zodiac.

Angela Hession grew up with her family in a town, west of Ireland called Claremorris, Co Mayo.

As of 2021, she resided with her husband in Texas, US. Reportedly, the duo regularly visited Ireland.

Speculatively, Angela might have received her higher education in her hometown.

Fact: Angela has a bother who participated alongside her at John McCain’s Straight Talk Express campaign.

As of Jan 2021, Angela Hession had no social media presence.

Likewise, her husband John Weaver was nowhere to be found on social media.  He even locked his Twitter account after the scandal.

Treading the same career as John, Angela Hession worked as a political aide. She was the deputy chief of staff to Rudolph W. Giuliani until his last day as mayor of New York ( i.e. till the end of 2001).

At the time, John was working as the senior strategist to Senator John McCain of Arizona. Just in case if you are curious about his jobs, John served as the chief strategist for Jon Huntsman’s 2012 presidential campaign, worked as executive director of the Republican Party of Texas, and worked for a few other big names like Phil Gramm, Tom Loeffler, and Bill Clements.

Did u know: John even signed a six-month $350,000 contract with a subsidiary of Rosatom (a state of Russia) in April 2019. However, he canceled the contract after a report of the contract was published.

Reportedly, it was Angela who majorly helped John to start his own consulting firm in 2017.

Angela Hession is John Weaver’s second wife. The duo first met in New York after the 9/11 attack in 2001. Reportedly, they both were there to help the city with communication efforts.

Dating a few years, the two then got engaged in early 2007. Also, they reportedly held their wedding that summer. Being a political couple, they struggled to find a date for the wedding.

As of 2021, the duo was married for over a decade and shared two kids.  And though John came out as gay then, it seemed that divorce was out of the question for him. He shared that despite being gay, he loved his wife and kids.

Now, coming to the question if Angela was aware of John’s sexual inclination? The matter was unclear. Angela chose not to speak about it, so the answer remained a mystery to us.