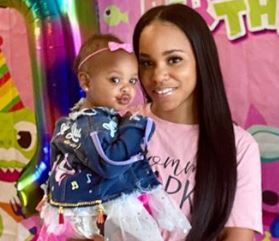 Sports brawl is no new thing, especially when it comes to Football. But this time, the fight wasn’t caused by an in-game adrenaline rush, rather it was the bad blood between Jalen Ramsey and his ex-girlfriend, Breanna Tate’s brother, Golden Tate.

On October 4, 2020, after the Los Angeles Rams won the New York Giants by 17-9, the game ended with a huge brawl with players and coaches gathered at the center of the field. In an interview, Giant’s, Golden shared that Jalen Ramsey provoked him with the “disrespect he showed at his sister and the things he did in the past”.

So, what happened between Golden’s sister, Breanna, and Jalen, get to know at the end of the article. On the way, learn all about her personal life in wiki format.

Corresponding to her birthday, Breanna is of Aries zodiac.

If she had to describe herself,  Breanna would choose the words “Blessed & Ambitious”, at least that’s what she did over twitter.

Besides Golden Tate, Breanna has another brother named Wesley and a twin sister named Deanna.

According to her Facebook profile, Breanna mentioned two other sisters named Demisha Porter and Jessica Rogan.

As for her parents, Breanna’s father, Golden Tate Jr. was also a football player who played for the Tennessee State and was a fifth-round pick of the Indianapolis Colts in the 1984 NFL draft. And her mother’s name is Yolanda Tate.

Though Breanna was from Nashville, she lived in Hendersonville, Tennessee before 2020.

Reportedly, her body measurements were 33-24-33 inches.

As of October 2020, Breanna had over 3.5 followers on Instagram @breannatate_. Her bio stated,

As a mom, Breanna’s job in 2020 was to take care of her kids. She was focused on giving them all the love rather than developing her career.

In light of her education, Breanna attended Ole Miss in Oxford, Mississippi. She and her twin sister, Deanna were on the track and field team there. Reportedly, Breanna participated in the NCAA East Preliminary, SEC Championships, and won the 100 and 200-meter race at the MC Twilight Invitational.

Also, before Ole Miss, she went to Brentwood Academy where she was a two-time individual state champion.

Now, coming to the relationship between Breanna Tate and Jalen Ramsey that caused the spark at the SoFi stadium, it looks like Golden had a perfect reason to get a rush to the head.

Breanna and Jalen were in a long term relationship and shares two kids named Breelyn and Brooklyn. But as Breanna was pregnant with their second baby in the summer of 2019, Jalen broke up with Breanna!

The breakup wasn’t mutual. Although the detail about their split wasn’t shared, not only Breanna but even Golden was very unhappy about it.

As Jalen took shared a picture of himself and with his new girlfriend, Monica Giavanna, Golden decided that he would “show him” at the football match up. Unfortunately, he lost the match, plus with the provocation about his sister, it was natural for him to boil up.

However, Breanna had yet to speak about the matter.