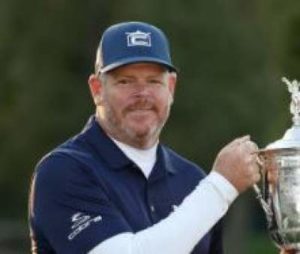 Early in July 2021, it was reported American professional golfer Bryson DeChambeau broke up with his caddie Tim Tucker – that Bryson was forced to get a new caddie because Tim quit.

Find out the real story behind the scene behind Bryson and his caddie’s on-and-off relationship, in this Tim Tucker Wikipedia.

Only last year (2019) on his birthday (June 26th), Bryson DeChambeau had wished Tim Tucker the happiest birthday on a tweet that read:

“Happy birthday Tim! Thanks for everything you do and thanks for doing an unbelievable job for me.”

Tim Tucker stands to a height of 5’11” or 1.80 meters. Clearly, he appeared a few inches shorter than Bryson in his 6′ 1″ when the duo was seen together in the golf course.

Tim Tucker hails from his hometown of Coos Bay, Oregon. His full name is Timothy Tucker and “some people” (probably his family) called him Timmy Tuck.

Tim’s early life and family background were yet to be covered by the media outlets.

All we know is, he competed in three U.S. Mid-Amateurs, spent four years in the U.S. Air Force, and another three years working as a security officer for the U.S. State Department before he started his career as a caddie.

Tucker had started caddying Bryson at the 2016 Memorial tournament. He continued to do so until the middle of 2017 switching caddies to veteran Micah Fugitt before reuniting with Tucker in early 2018.

Surprisingly, Bryson has known Tim since he was 15-year-old.

Speaking about Tim, Bryson was many times been heard saying the likes of “I think the biggest thing is that he’s a calming effect on me” or “He’s super easy and cool and collected. Whatever I say, it doesn’t bother him at all. We just go out there and have a good time.”

Caddies typically made anywhere from 5 to 10 percent of the tournament winnings on top of their salaries. So, one can speculate, Tim took home a huge payday, especially since he and Bryson won the top prize last year.

If the news of Tim Tucker leaving Bryson is really true, Tim will be giving up anywhere from $67,500 to $135,000 if Bryson wins any competition in the first place.

That been said, Bryson, however, also told Michael Collins of ESPN that Tim did not quit being his caddie. Instead, they are “taking a break” and will be spending some time apart.

Tim has previous experience as both a player and caddie. He played in the 2007 US Mid Amateur at his home course of Bandon Dunes Golf Resort where he used to caddie.

Tim Tucker had above an estimated $1.5 million net worth before June 2021.

He really had a lot of success with Bryson DeChambeau before he left the job. In fact, even Bryson profited well from Tim as his Caddie over the years.

Tim had become a permanent fixture of Bryson’s team.

However, it was unclear what went down between Bryson and the caddie who once helped lead him to victory.

Tim was not found on other social media platforms including TikTok. But, he frequently appeared on the news from the golf world.

To a Golf Digest claiming – “Bryson DeChambeau and caddie Tim Tucker have mutually agreed to go their separate ways. Tim was getting tired and Bryson was getting tired. In any relationship, they run their course, and that’s what happened here.” – on July 2, 2021 – a Twitter user had commented: “Brother Tim gets to stay home with wife and baby.”

Tim Tucker is pretty secretive about his personal affairs. Now and then, one could see him give a tour of his “man cave” from his Colorado home but he rarely spilled anything about his wife or their married life.

But, Tim sure did mention his daughter, Regan in a Nov. 2019 post on Instagram. He briefly shared a “Skiing with my Daughter Regan” moment at Keystone Resort.

Regan, her Instagram @reganmarie114 writes she is a vegan who was born sometime in 1997.