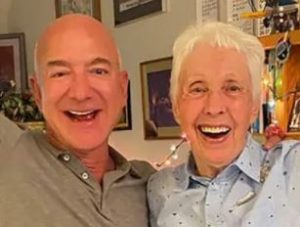 Ready to become an astronaut for over six decades, Wally Funk finally got chosen to fly into space alongside the CEO of Amazon, Jeff Bezos in 2021. According to Blue Origin, Wally will venture on their latest suborbital spacecraft named “New Shepard” as an “honored guest,” — or in simple words, “free of cost”.

So, who is this lucky woman? Delve into her personal life as this article proceeds.

The involvement of Wally Funk on Blue Origin’s inaugural crewed flight may be a clever public-relations move by Jeff Bezos — building his image as a “hopeless romantic” when it came to the story of spaceflight. However, it was indeed a real gift to someone like Wally who waited her whole life to be in space.

Over a video shared over Jeff’s IG, Wally was seen putting her arms around him and expressing her thanks. “Honey, that was the best thing that ever happened to me,” she said.

As per Blue Origin, Wally’s adventure will be shared by three other people, namely Jeff, his brother Mark Bezos and the winner of an auction who forked over $28 million for the opportunity (name not shared).

Wally Funk was born on February 1, 1939. So, that would make her 82 years old when she was selected to accompany Jeff Bezos on his journey to space in 2021.

Corresponding to her birthday, Wally is of the Aquarius zodiac.

Wally Funk hails from Taos, New Mexico, where her family owned a five-and-dime store. She shared that her father was a hard-working man and knew about her obsession with airplanes. So, occasionally, he would bring home model airplanes for her to build.

Moreover, she wonders if her family ever saw her trying to fly by jumping off the roof of the family barn.

Also, Wally recalled that her family lived very with the native Americans, and they taught her how to hunt, fish, camp, and ride a horse alongside them. Guess, this was where Wally’s courage and perseverance came from.

Trivia: Wally first flew in a plane at 8, and just by 10, she had her mother driving her out to an airstrip to study the planes parked there.

Wally Funk stands tall at a height of 5 feet 7 inches (170 cm). That makes her as tall as her space mate Jeff Bezos.

Mentioning her distinct features, Wally has short hair and a beautiful smile.

Did you know: Young Wally also had short hair and didn’t look any different than her older self.

A child prodigy, Wally became an expert marksman by the age of 14, and even received the Distinguished Rifleman’s Award then. Also, the same year, she represented the southwestern United States as Top Female Skier, Slalom, and Downhill races in the United States competition.

At 16, Wally then joined Stephen’s College in Columbia, Missouri, where she learned to fly and realized that she “wanted to fly for life.” So, after graduating in 1958 with an Associate of Arts degree and rated first in her class, she applied to become a commercial pilot at both TWA and Continental. Unfortunately, she was rejected as “they couldn’t hire women because they didn’t have a ladies bathroom at the training facility.”

Thus, Wally instead became a flight instructor and taught US Army officers to fly at a military base in Oklahoma. She would go on to teach flying for over 4 decades, both privately and commercially.

Wally Funk doesn’t have a husband or a spouse. Guess she might be the perfect candidate to go on space adventures as she had no one waiting for her at home.

Maybe, when she returns after being the oldest person to fly to space, Wally might think about settling down? Well, it’s never too late to take on a spouse and experience the bliss of a relationship.

Previously, the world record for the oldest person to fly to space was held by John Glenn, who went to space when he was 77 years old.

Was Wally Funk Ever Married?

No, Wally Funk was never married. “I am married to airplanes,” she said.

It seems that the flight instructor has led a life without a husband or spouse. In fact, Wally never even had a chance to focus on relationships as she spent all her life trying to get into NASA.

According to Wally, she has applied to NASA’s astronaut corps four times but was rejected each time as the agency wanted its astronauts to have engineering degrees, and she didn’t.

However, Wally’s decision to chose airplanes over husbands wasn’t in vain. Although she never got into NASA, her perseverance was rewarded with a bolt from the blue; Jeff Bezos’s Blue Origin project.

Is Wally Funk A Lesbian?

Since Wally Funk never took on a husband nor revealed her dating history, a minority of the internet believed that she was a lesbian. Some justified — as LGBTQIA wasn’t was a thing in the past, Wally might have never had a chance to come out of the closet.