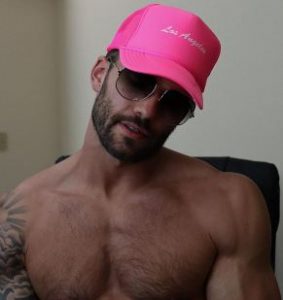 Slade Parker arrived at the villa of Love Island USA season 3 with Wes Ogsbury. The handsome boys turned everyone’s head in episode 9 of the show. He claimed that he would provide the Southern Comfort to the beautiful ladies of season 3.

First off, Slade laid his eyes on Olivia. He deemed that they must share a love of the outdoors. He also shared that he tends to go for brunettes during his debut as a reality star in Love Island USA.

Plus, Slade wasn’t just looking for hot romance on the show but also a life with commitment and find someone who could make him better and reciprocate the same gesture.

Slade Parker was 27 years old as of July 2021. He is yet to divulge info regarding the date of his birth. Consequently, his birthday and zodiac sign remains a mystery to most.

Slade Parker was born in his hometown of Cedartown, Georgia, the United States to his parents: father Terry Parker and mother Brittney Parker. Both of his parents are involved in a family business of printing which his father and his uncle started in 1990.

Per an article on The Polk County Standard Journal, his parents were together for over 2 decades. But, there are no further updates on his parents’ marriage, but they are most likely still together to this day.

The handsome hunk inherited the good genes from his parents. With a little bit of facial hair, his looks were further accentuated. A large tattoo on his right arm is his distinct feature.

From a brief observation, we can narrow down the fact that Slade Parker is not much interested in social media. The only platform he could be discovered on was Instagram where he goes by the name (@slaaader).

Until 19th July 2021, Slade’s profile earned 5022 followers and contains only 5 posts. Other than that, there existed no account which belonged to him on Facebook and Twitter.

Slade Parker, with income flowing from his family business, sits on a total net worth of $200 thousand.

Starting with education, Slade attended Georgia Highlands College in 2015. He graduated with an associate’s degree in Healthcare Professions in 2017. Immediately after, she enrolled at the University of West Georgia where she studied Biology Sciences. He graduated as a class of 2019.

Even though Slade took biology and healthcare professions as a college major, he started working as a Graphic Designer/Sign Specialist in his family business named Parker Printing Company, Inc. As already stated, the printing business was started by his father and uncle in 1990.

Before that, his father and uncle had over 15 years of experience working in the AT&T Print Shop in Atlanta. This allowed the Parker brothers to found their own business. During an interview in a local newspaper, they described the business as “going out on a limb” or “putting our reputation on paper every day.”

According to the interview, Parker Printing Company, Inc.’s first customer was Greg Wilson at Wilson’s Upholstery Shop, located on Highway 278 in the Fish Creek Community. The work which they produced spread in their community and soon the business started flowing in.

Their customer base expanded to adjoining counties and outside of it like South Carolina, Tennessee, Utah, California, and others states. Later, his uncle Tim Parker started a shredding business named All Service Document Shredding.

With a tall physique, attractive looks, and outgoing nature, Slade Parker is a complete package. So, hardly anyone would believe if he claims that he has been single all of his life. But, as already established he is private when it comes to personal stuff.

Until 2021, Slade hasn’t shared any information on his former girlfriends and flings. Moreover, he remains extremely low-key on his social media, so it also offered nothing on his romantic life. But, the fact that he came to Love Island USA means that he was single before he signed up for the show.