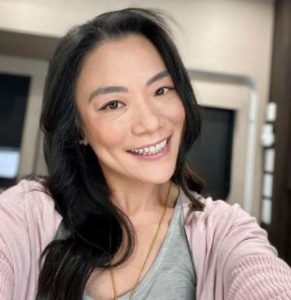 Discovery+ dropped a new culinary cooking contest show, The Globe, on July 17, 2021. And the foodie fans were naturally prying about its feature judge and “cooking extraordinaire”  Shirley Chung.

Discover more about her in this ‘Shirley Chung Wikipedia’.

Shirley Chung On The Globe

More than anything, Shirley Chung was excited that she and the team were going to her homeland of Beijing on the first episode of On the Globe for Hotspot challenge.

Together with fellow chef Daniela Soto-Innes and show’s host Robert Irvine, Shirley will be taking its competitors and viewers through cuisines around the world.

Shirley Chung reached the age of 44 in 2020. Her birthdate — Dec. 23, 1976 — makes her supposedly a disciplined, goal-oriented, dependable, and ambitious Capricorn.

Much young appearing Shirley Chung stands below a height of 5’4” or 1.63 meters.

Just as Shirley’s mom said, Shirley sure is blessed with her dad and mom’s good genes. Her parents once used to be a very good-looking and fashionable couple.

Shirley was born and raised in Beijing China but was exposed to international cuisine at an early age by her grandmother, Liang Si Yi, who back then used to be a director of The Red Cross in China.

Shirley immigrated to America at age 17 for college, she worked in Silicon Valley for a few years after graduating and has remained there ever since. As of July 2021, she lived in Los Angeles, California.

Basically, she admits to being a proud first-generation immigrant, living her American dream. (Of course, during the COVID pandemic, as a Chinese-American she too had to face the fueling ‘hate crimes against Asian-Americans in a way.)

For siblings, Shirley has a sister named Karen Chung who is some kind of a medical professional.

Until July 19, 2021, Shirley Chung had 57.1K followers on her Instagram @chfshirleychung.

Shirley was also on Facebook. She had 8K followers on her chef page that said “Cook with me! Dine with me! Let’s go see the world one bite at the time!”.

Shirley Chung already had above an estimated $2 million net worth before the world knew about her On The Globe stint.

She is the Chef/Owner of Ms Chi Cafe which is located in Culver City and a satellite location is at The Fields LA food hall in DTLA.

Shirley is trained in classic French and Italian cuisine. She previously worked and opened restaurants for the likes of Thomas Keller, Guy Savoy, and Mario Batali.

Also, in the past, she held the Executive Chef Position at China Poblano, by Jose Andres. The diner was nominated for the Best New Restaurant Award by the James Beard Foundation in 2011. She was also the Chef/Owner of Steamers Co. and Chef/Partner at Twenty Eight Restaurant.

Besides, the California Culinary Academy alum has also notably authored the cooking book Chinese Heritage Cooking From My American Kitchen (2018).

Shirley Chung has been married to her husband Jimmy Lee since 2006. While she has known him since at least 2000.

On October 8, 2020, as the couple celebrated their fourteen years, Shirley tagged her otherwise private husband on her IG post writing,

“Happy 14 years babe! 👩‍❤️‍👨I can’t imagine spend 24/7 with anyone else. 💕Running our first “baby” @mschicafe for 2 years, and spending every single waking moment together for 4 months, only had 1 big fight, we are impressive 😆✌️Cheers to many many many more years of us 🥂❤️”

As their “first baby”, Shirley was referring to her “progressive” Chinese cuisine restaurant Ms Chi Cafe that she ran in a partnership with her husband Jimmy.

So, at Ms Chi Cafe, Jimmy oversaw the front of the house but also looked over a Jack-of-all-trades and led everything that went on behind the scenes. Unlike his wife, he is originally from Southern California.

The two met while they both worked in technology in Silicon Valley. Afterward, Shirley decided to follow her passion for food, leaving her career in the high tech behind. And her husband, Jimmy too joined in.

They really seem to have built what they call a ‘made for each other’ bond and partnership. Despite not being registered under the same party, they managed to lead a happy life raising their beloved dog Baxter. 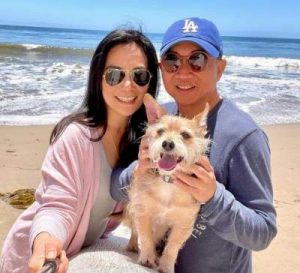 Only back in June 2021, Shirley and her husband, Jimmy had the best of times during their summer vacation with Baxter at Santa Barbara.

The dog mom had shared, they had no WIFI, didn’t check email, finished 1/2 novel, ate lots of seafood, brushed up on her selfie stick skills, stayed in a yurt, with her boys.