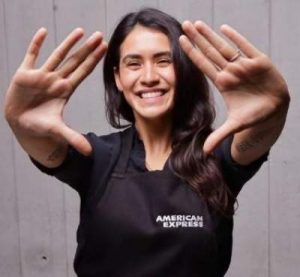 Discovery+ dropped a new culinary cooking contest show, The Globe, on July 17, 2021. The foodie fans were soon curious about its young and ever-happy feature judge and “cooking extraordinaire” Daniela Soto-Innes.

So, below is a ‘Daniela Soto-Innes Wiki’ covering all about Daniella’s life beyond the camera — her married life, net worth, early life, and family background that you have been prying around.

Daniela Soto-Innes On The Globe

Daniela Soto-Innes features on The Globe after she became the youngest honoree to be named the “World’s Best Female Chef by The World’s Best 50 Restaurants in 2019.”

So, On the Globe means a completely new journey to the Mexican-American chef’s culinary career. And she is excited that as part of the job she gets to share as well as learn culinary secrets from chefs like Shirley Chung.

Together with Shirley and the show’s host Robert, Daniela will be taking its competitors and viewers through cuisines around the world.

Daniela is used to using her buzzword ‘happy’ whenever referring to her husband, her restaurants, or when talking about her parents and siblings.

She was born in Mexico City. But the family moved to Texas when her mom got a “big” job in Houston. Daniela was 12 at the time.

Daniela Soto-Innes is the youngest of three sisters. The way Daniela speaks of her family, it’s clear she had a pretty well upbringing. Her parents were always supportive and her two sisters were always teasing her for wanting to cook all the time.

Daniela revealed, now (by 2021) one of them is a physical therapist, and the other is a lawyer.

Daniela’s mom wanted to be a chef. But instead, she got pressured and became a lawyer. (Both her parents practiced law together.)

She, meanwhile, managed to become one influenced by her grandmother who ran her own bakery. The culinary-passionate also briefly spoke of the time she grew up with a line of “really strong women” that love to cook. Even her great-grandma went to school for cooking.

Surprisingly, Daniela was a competitive swimmer until the age of 20 and never, before that, intended to cook.

The good-looking Latina chef, Daniela Soto-Innes, also a passable model from showbiz, stands to a height that is clearly above 5′ 8″ or 1.73 meters.

How Much Is Daniela Soto-Innes Net Worth?

In Feb. 2021, Daniela announced her decision of retiring from her role as a chef/partner of Cosme and Atla.

So, now (in July 2021), she worked as a Chef/Instructor at Pollos en Llamas Cancún (as per her Facebook profile). Also, ABC News reported Daniela has been running Damian, a Japanese-influenced Mexican restaurant, and Ditroit, a taquería, both in Los Angeles with Enrique Olvera. (Enrique is her business partner since Cosme and Atla.)

Before growing her culinary empire, Daniela graduated from Le Cordon Bleu College of Culinary Arts in Austin, Texas, and held positions at Brennan’s and Underbelly in Houston.

Throughout this journey, Daniela believed that the simplest food can inspire the most imagination and with the idea, she kept growing  and “finding the secret life in each ingredient.”

But again, it’s not only the flavorful food but also the people who make it that appeals to this culinary queen. For instance, during Cosme’s reign, Daniela made sure most of her staff were Latin American immigrants, while a few were brought in from Russia and other countries, as well.

So, like always, Daniela believes it’s the fusion of people, ideas, and recipes that makes any restaurant successful.

The day Daniela Soto-Innes received the news that she has been voted the World’s Best Female Chef, she was in Tulum, Mexico, celebrating her engagement to fellow chef Blaine Wetzel. And yes, she is now married to him.

The two met in 2020 while in Bilbao to attend “The World’s 50 Best Restaurants 2018” celebrations. They started dating and continued their long-distance romance between Daniela’s home in New York and Blaine’s on Lummi Island, Washington State.

The day Blaine got engaged to her in March 2019, he took to his Instagram @blainewetzel to declare:

“❤️❤️❤️❤️❤️❤️Officially the luckiest man alive. Sorry guys, I got the queen! I found the love of my life, the most beautiful woman who is my best friend, my biggest inspiration and also the funniest comedian alive. @danielasotoinnes radiates with positive energy and endless happiness and is the sweetest most loving person who lives to make others smile… SHE.SAID.YES!!!!!!”

Daniela termed the day as the best day of her life. The beloved chef also informed her followers on IG that she and Blaine had planned the wedding that day at noon and had vouched for a lifetime on sunset in the mountains. Her sister Andrea had officiated the private and first wedding ceremony that included close friends and family. 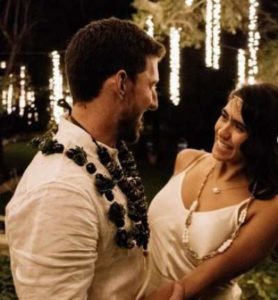 From the day, Daniela Soto-Innes and Blaine Wetzel got married (PIC: Daniela’s IG)

Blaine has been a Chef at the Willows Inn in Lummi Island, Washington, since 2010. Before that, he served at Noma, L’Auberge Carmel, Relais & Chateaux, The Phoenician Resort, and citronelle.

Also, quite popular on social media, he had 18.1K followers on Instagram. Of which we also learned he and Daniela were beyond happy to be co-parenting their baby like dog Canela.