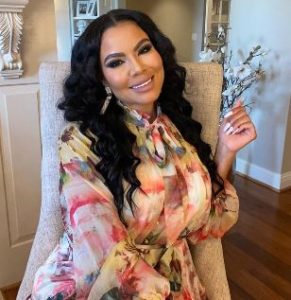 Mia Thornton is best known as a reality star of The Real Housewives of Potomac (RHOP). She is an accomplished lady who found her success in entrepreneurship and franchise ownership. Scroll down this Mia Thornton family where we cover details on her parents, siblings, and life partner.

What Is Her Maiden Name?

With the maiden name Fields, Mia Thornton was born as Mia Nicole Fields.

Yes, Mia was adopted. For a few years, she lived with foster families. Later, her adoptive parents Robin Elaine Lynem and Daryl E. Lynem took her in.

Even though Mia Thornton never got the privilege to feel the love of her biological mom, her adoptive mom Robin Elaine Lynem filled that hole that was in her heart.

Robin was born to her parents: Howard Edward Simmons Jr. and Mary Elizabeth Simmons on 24 March 1959 in Detroit. She attended and graduated from Mackenzie High School in 1977 with a diploma in Cosmetology. In 1984, she earned her barber’s license from the State of Oklahoma.

Mia’s mom met her dad during a trip to the local mall with her mom and her sister Veronica Simmons. Robin and Daryl married on 5 December 1980. In the years, they were together they had three daughters. The couple later added Mia into their family as an adoptive daughter.

Talking about her job, Robin worked for 28-years at the Regis Corporation which started in Irving, Texas. She won the Presidential Award in 1994 as a Salon Manager by increasing her salon sales by 41% in the calendar year. Later on, she was promoted to an area supervisor in Dallas, Texas, overseeing 13 Signature Regis Hair Salons in the local malls.

Years later, Robin became in charge of over 95 salons across 3 states Florida, Georgia, and Alabama. During the 28 years of her career, she also got the opportunity of business travel in Spain, Germany, England, Ireland, Italy, Israel, Turkey, China, Thailand, Canada, Mexico, and the Hawaiian Islands. In 2015, Robin put an end to her long career with Regis as a Regional Vice President.

Sadly, Mia lost her mom on 29 December 2018, stripping her off of the motherly love which she received from Robin.

Mia Thornton’s dad is Daryl Lynem. Daryl and his wife had four kids Candis N Lynem, Daryl E Lynem Jr., Brianna R Lynem, and of course Mia. He stayed committed and happily married to his wife till her last breath. However, Daryl had to go through immense pain after his beloved wife’s early demise.

Later, he and his family relocated to Florida after receiving a promotion in his anonymous job. From September of 2002, he has been working as a Station Manager in Delta Air Lines.

Does Mia Thornton Have Siblings?

Candis Lynem attended Capella University in 2014 after graduating high school. She graduated in 2020 with a bachelor’s degree in human resource/personal administration. She also earned her cosmetology license from the Department of Business and Professional Regulations.

However, Candis’s career started long before that. She joined Regis Corporation as Salon Manager in 2001. She worked there for 11 years before quitting her job in 2012. In July 2012, she took the job of Account Service Representative at HairUWear Inc.

After working in the company for almost three years, Candis decided to join POM MRI & Imaging Centers in May of 2016. She worked in the company from May 2016 – Jan 2019 as Human Resource Manager/ Executive Assistant.

Moving on, her sister, Briana attended The Ohio State University where she earned her degree in psychology in 2011. She earned her master of science in Human Resource and Organisation Development from the University of Louisville.

Briana worked at Community Housing Network as a receptionist and later as an administrative assistant till October of 2013. She joined OSU as an administrative support specialist (Oct 2013 – Feb 2015) followed by an HR Specialist from 2015 to 2019. She has been working in Columbus Urban League as HR Committee Member and Centric Consulting as HR Generalist.

Mia Thornton and her partner Gordon Thornton have been together since 2007. On an Instagram post dated March 2021, she wrote a caption where she reminded that they were together for 14 years. Mia made it clear to the ones sending her thirsty DMs that she is happily married and nothing was worth risking her relationship with Gordon Thornton.

Despite the age difference of 32 years, they knew they were meant for each other and hit it off immediately after they met. After five years of dating, Mia married Gordon on 5 May 2012. From the marriage, she earned an in-law cousin named David Freeman and another step-daughter Debrecia Fonville. 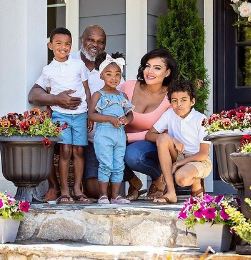 As of July 2021, they have been married for 9 years and they had 3 kids;  Joshua, Jeremiah, and Juliana. But on 18 March 2021, Mia shared about almost losing her husband. She was thankful to God that he got her on the knees. The thought of almost losing Gordon brought her a new perspective into life.

Apart from the crisis, the married couple stood strong. On their 9th wedding anniversary, she took it to her IG to wish him where she wrote: ” ‘I wish I could turn back the clock. I’d find you sooner and love you longer.’ Happy Anniversary my love.”

Gordon hails from his hometown of Elizabeth City, North Carolina, and lived in Charlotte, North Carolina. He is a former owner/operator at McDonald’s, Massage Envy, and The Joint Chiropractic.

How Many Kids Does Mia Thornton Have?

Mia Thornton and Gordon Thornton had three kids: Joshua, Jeremiah, and Juliana. She shared very little about her kids but she wrote a post dedicated to her sons in March of 2021.

“To my sons, I decree and declare that no weapon formed against you shall prosper! I cancel every assignment of the enemy… break every word and a generational curse! I plead the Blood of Jesus and the Name of Jesus over your life! You shall live and not die and declare the works of The Lord!” Mia wrote on the post.

Mia ended the post wished her son long life, good health, and prosperity. She asserted that the past doesn’t define the future and she reminded her kid that they were a blessing to the “Kingdom of God”.