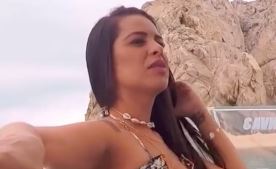 A beauty from abroad, Roberta became an overnight sensation following her debut on “Seeking Sister Wife”. She entered the show as the potential wife of Garrick and Dannielle Merrifield.

Uncover facts about the reality star including her age, job, and Instagram over this Roberta wiki. Furthermore, find out her last name, nationality, and physical stats.

For context, Roberta is as old as Danielle Merrifield. Meanwhile, Garrick Merrifield was born 4 years before them.

Being from Brazil, Roberta possesses a strong command of Portuguese as it is her mother tongue. Also, she should have some understanding of the English language.

What’s more, according to the publication realitytitbit.com, Roberta is a devout Christian.

Roberta’s immediate family and last name remain lowkey. However, with the TLC fame, details about them will likely come soon.

Going by the pictures shared by TLC, Roberta flaunts a voluptuous figure. Unsurprisingly, some even assume she went under the knife at one point. However, without substantial evidence, many labeled it a rumor.

While both Garrick and Dannielle were easily locatable on Facebook as of March 2021, Roberta wasn’t. In part because the “Seeking Sister Wife” hadn’t given out her last name. Likewise, the TLC fans couldn’t find Roberta on Instagram.

At the start of the 3rd season of “Seeking Sister Wife,” Roberta hadn’t explicitly shared the details about her job.

However, it didn’t stop the fans from assuming. Some argued she wouldn’t have agreed to marry Garrick for a shot at the so-called American Dream, had her job in Brazil been fulfilling. While others asserted she was a menial worker.

Are Roberta And Garrick Married?

As of March 2021, Roberta and Garrick weren’t married. According to The Sun, a marriage license for the couple hadn’t been issued in the state of Colorado.

After more than a decade as a married couple, Buena Vista, Colorado residents, Garrick and Dannielle Merrifield claimed that God pushed them into polygamy. By then, the couple already had 2 kids.

During the search for their “sister wife,” Garrick and Dannielle came across Roberta.

After the authorities denied the Brazilian beauty a Visa to America, she met Garrick and Dannielle in Mexico. There, she and Garrick got engaged and intimate. Dannielle, meanwhile, seemed unhappy by the latter, leading many to believe that she was forced into polygamy.

Opening about their kids meeting Roberta, Dannielle revealed— “The boys, I think at first they were super nervous about Roberta. Geremiah was like, ‘I only have one mom!’ It’s hard because she’s in Brazil, she’s not a part of our everyday life. They don’t talk to her every day like we do — language barrier and all that. So it is a little bit of an adjustment.”