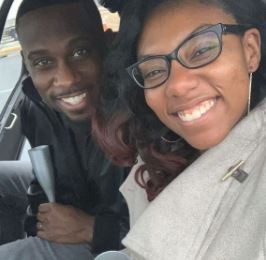 Derrick Jaxn, a YouTuber, and Self Love Ambassador confessed to cheating on his wife Da’Naia Jackson with a woman. Ever since then, Da’Naia has been the center of focus and people have wanted to know more about her.

Delve into this Da’Naia Jackson Wiki to learn more about Derrick Jaxn’s wife.

Da’Naia Jackson celebrates her birthday every year on 21 December. She turned 31 years old in 2020. Per that info, Da’naia owned Sagittarius as her zodiac sign.

She was born Da’Naia Latrice Broadus to her father Leslie Keith Broadus Sr. and her mother Linda Faye Buchanan in her hometown of Denver, Colorado, the United States. Other than names, no further information surfaced on her parents.

Sadly, Da’Naia’s father, who was born on 10 November 1971, passed away on 25 July 2002 at the age of 30. For Da’Naia, her father was a hero, and even after all these years, she wishes her father a birthday and father’s day every year. Moreover, Da’Naia’s younger sister and their twin brothers are the ones who are alive in the family.

Larry George Phillips and Gertha Lee Evans were her grandparents. Her grandfather passed away on 17 December 2009. Her grandma passed away exactly 9 years later on the same day her husband did. Talking about her grandma, Gertha was a championship bowler whole briefly lived in Okinawa, Japan an early age with her siblings.

Jumping into Da’Naia’s education, she attended Smoky Hill High School in Denver, Colorado. After high school, she attended Tuskegee University to pursue her bachelor’s degree. She earned her degree in Hospitality Management from the University at the time of graduation in 2012.

Along with that, Da’Naia also earned a bachelor’s degree in Sales and Marketing in the same year.

On the website, Da’Naia shared her weight loss journey. She shared— “I actually started on January 13, 2017, because it was a year out from my wedding date.”

Da’Naia added 64 pounds in 2016 after having a kid because of postpartum depression. However, she found a personal trainer at Onelife Fitness who helped her achieve her goals. She had a workout routine where she trained 3 days a week.

Da’Naia could only be discovered on two social media platforms. Her Instagram account earned 19.3k followers as of March 2021. Furthermore, she is also on Facebook but posted on the platform the last time in September 2020.

While at Tuskegee University, Da’Naia Jackson served as VP of Hospitality Club and was a team member of the Marching Crimson Piper Band. After graduating college, she joined TEKsystems in November of 2012.

In TEKsystems, Da’Naia sold information Technology services including IT staffing, Talent Management, and Retention Develop fact-based strategies to sell to IT consultants. She also sold, negotiated, and executed contracts between contractors and clients.

Da’Naia also created new business channels through intelligence gathering in the un-marked territory. She worked for the company for almost 2 years before she quit her job in July 2014.

Immediately after stepping down from TEKsystems, Da’Naia joined Veredus A Hays Company as an account manager. The company has over 220k followers working in the privately-owned firm and operated from 9 different countries.

After Verdus, Da’Naia joined Tech USA in November 2015. She served as an account executive for the company for 4 months before she stepped down from the position in February of 2016.

From November of 2014, Da’Naia has been serving as the CEO of ShopDerrickJaxn LLC. Along with a progressive career, Da’Naia Jackson also built a sizable net worth of $700 thousand.

In 12 years of acquaintance and relationship, Da’Naia Jackson and Derrick Jaxn stick together through all of the highs and lows. Later in 2016, Derrick got on his knees to beg for Da’Naia’s hand for marriage. But even before the engagement, Da’Naia had already welcomed a kid in the world, their daughter Marley.

Two years after getting engaged, Da’Naia married her fiance, Derrick in January.

In March 2021, Candice De Medeiros opened up about her affair with the love guru, Derrick Jaxn. She also shared that he gave off the impression that he separated from his wife. As Candice told, she also spent a getaway in June 2020 with Derrick in Miami.

To address the rumor, Derrick took to Instagram to accept that he cheated on his wife. He also claimed that at the time of the affair with Candice, he separated from his wife.

In the aftermath of everything one question tickled the interest of people, are they getting divorced? To cut to the chase, no they the married couple isn’t separated and probably won’t be getting a divorce any time soon.

Even though Da’Naia left Derrick, not until, she saw a changed new man in him. So, she returned and discovered something that they never did before in 12 years together.