As the 17th season of Deadliest Catch returned to Discovery Channel Network on April 20, 2021, so did Scott Campbell Jr, the fisherman who piloted the fishing vessel Seabrooke for four seasons.

Get to know everything about him in the article below. From his age to net worth and wife information–this Scott Campbell Jr wiki has it all.

The captain of Seabrooke, Scott Campbell Jr’s age was 47 as of late April 2021. Reportedly, he was born in the year 1974. Scott celebrates his birthday on the 15th of April of every year. According to his birthday, his zodiac sign should be Aries.

Scott Campbell Jr is a second-generation crab fisherman. His father Scott Campbell Sr was the first one in his family to be attracted to fishing.

In fact, his father was the reason why he got into fishing in the first place. As a kid, Scott spent a lot of time with his dad in his boat. In doing that business regularly, Scott fell in love with fishing.

To talk about his other family members, the incredible fisherman has two sisters namely Kristin Valenti and Kara Campbell. Kristin works at Milestone Settlement LLC and formerly worked as a trade analyst at Butterball. Furthermore, the graduate of ASU Downtown Phoenix Campus is married to her husband Chris Valenti. As of April 2021, no information about Kara was available.

Scott Campbell Jr stands tall at a height of 5 feet 11 inches and weighs no more than 85 kilograms. His distinctive physical features would be his heavily built body, brown hair, and eyes.

The Washington native went to McLoughlin High School for education.

After season 10 of Deadliest Catch ended, Scott paused his fishing career as his back injury restricted him to do the work properly. Even multiple surgeries could not help captain F/V Seabrooke.

While he was off from his fishing career, Scott pursued other ventures. First off, Scott launched his own line of coolers. Cordova Company, based out of Nampa, Idaho, produces some fine foam-injected roto-molded iceboxes.

Besides being a fisherman and a businessman, Scott is a published author too. Together with Jim Ruland, he co-authored the book Giving the Finger: Risking It All to Fish the World’s Deadliest Sea.

Yes, the captain of Seabrooke, Scott Campbell Jr has a wife and her name is Lisa Campbell. Though we don’t know how the couple first met each other, it’s a known fact that Scott first married Lisa on August 20, 1994.

Scott first featured Lisa on his Instagram handle on August 3, 2014. Uploading a picture of him kissing Lisa, he wrote, “With my hot sexy wife at #watershed2014 this is awesomely cool!!!!!” 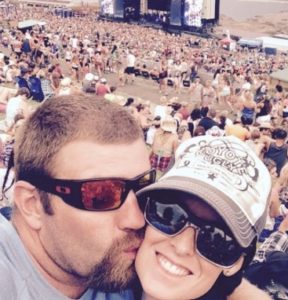 Scott Campbell Jr with his wife Lisa circa 2014.

To give a little more information about Scott’s wife, well Lisa is an Office Manager Lady at Alaska Enterprises, LLC. The graduate of McLoughlin Union High is also a Chief Financial Officer at Arctic Enterprises LLC.

Many people don’t know it but Scott has divorced and re-married his Lisa three times. Presently, the couple is happily married and living in their home in Meridian, Idaho.

Scott Campbell Jr has two daughters, Trinidy and Stormee, with his wife Lisa. The younger one’s name is Trinidy. According to her Facebook profile, she went to Wa-Hi and has a boyfriend named Kaden Kilburg. The older one, Stormee, went to Walla Walla High School.

Scott’s daughter Stormee also has a child, Rainee (a daughter), of her own. Scott often takes Rainee with him to fish in the water.