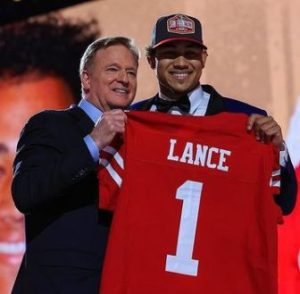 During the 2021 NFL Draft, former NDSU player Trey Lance was recruited by the San Francisco 49ers. The player comes from a family with football in their veins. Now that he is committed to the team, Trey Lance’s family and his career are brought under scrutiny once again. This Trey Lance Wiki unfolds all the necessary details on the man himself. So, scroll down to learn more about him.

Trey Lance was born to his mother Angela Irsfeld Lance aka Angie and his father Carlton Lance in his hometown of Marshall, Minnesota, the United States.

Talking about her parents, Angie, daughter of Pat Irsfeld and Gail Irsfeld, attended Marshall High School and graduated in 1988. She worked for Schwans. As for Carlton Lance, he attended and graduated from Southwest Minnesota State University in 1994. He co-owned Hampton Ridge Financial with Nate Bourne.

Before starting their own business, Carlton worked in U.S. Bank for 13 years. He had a business degree with a marketing minor. Carlton also played football for four years with the Mustangs.

As for how Trey’s parents met, both attended SMSU and met each other. Talking about himself and his wife, Carlton said— “I remember the party, but not the date”.

Trey Lance is not the only child of his parents. He grew up as a role model for his younger brother Bryce Lance. His brother turned 18 years old in August of 2020.

Following the footsteps of his brother and father, Bryce also committed to North Dakota State University. He also received offers from South Dakota State Columbia and Dartmouth. During his senior year, he recorded 30 catches for 631 yards and eight touchdowns breaking almost every school record in receiving. Standing at a height of 6 feet 2 inches (1.87 meters), Bryce played wide receiver for his brother’s team Bison.

Based on the bio of Trey Lance on ESPN, he was born on 5 September 2000. In September 2020, Trey Lance turned 20 years old. Moreover, Trey is a Virgo by zodiac sign.

Per reports online, Trey Lance had already collected more than $20 million in net worth.

Trey Lance was the No.3 pick in the 2021 NFL draft who was selected by the 49ers. Coach Kyle Shanahan believed he would be a perfect fit to become a long-term quarterback for the 49ers. But his journey as the best become one of the best new players for the 2021 NFL Draft.

The Minnesota-native attended and graduated from Marshall Senior high school. While graduating he earned a 3.9 GPA. He majored in strategic communication and minored in business administration. He committed to North Dakota State University.

Trey is often named as a complete football player to the nth degree. He was often recruited to play everywhere on the field. As a senior in high school, he threw for 14 touchdowns and rushed for 10 more.

All because of his strong defense game, Trey also stirred conversations with his performance. Lance recorded 54 tackles and three interceptions. Though he played QB, he also blocked a field goal.

Trey Lance, as Mr. accurate, also maintained an impressive record in his collegiate career. He went the entire freshman season without an interception. He threw 28 touchdowns that season.

The Minnesota-native held the record for most pass attempts in a season without an interception at 312.

In 2020, NDSU played only one game. The college was intercepted against Central Arkansas. The Bison came out with a win at the end of the game. In the game, Lance scored four touchdowns in total, which included two passing and two rushings.

As a true freshman, Trey played two games and proved his precision. He completed his only pass attempt that season for a 12-yard game. He also ran for two TDs in the same games. A month after NFL drafted Tom in 2000, Trey came to the world.

A piece of trivia: Trey’s father was a cornerback with the 49ers in 1994. He was in the training camp for two weeks. He was signed on 22 July 1994 but got waived two weeks later. Professionally, his father played two games; one in Canada and another one in Europe.

Another trivia is, he also has a dog named Niner. All of Lance’s boys wore 9 throughout high school.

Trey also won the STATS Jerry Rice Award in 2019. He became the first player to win the top FCs as a freshman while also winning the STATS FCS Walter Payton Award. On top of that, Trey earned a comparison with Steve Young as Steve completed BYUs with a 65.2 completion percentage and 18 rushing touchdowns as a dual-threat quarterback. Whereas, Lance left college with a 65.4 completion percentage and exactly 18 rushings.

Sportac.com projected Trey Lance’s salary cap for the year 2021 was $6.2 million. The 4-year contract that he signed with the San Francisco 49ers was worth around $34.1 million. The deal also reportedly held the 5th-year option that the franchise could trigger.

Upon penning the deal with the 49ers, Trey took home a whopping $22.1 million in signing bonus.

Based on the player stats, Trey Lance stands 6 feet 4 inches (1.93 meters) making him the tallest in the family. Furthermore, he weighed almost 102 kilograms (226 lbs).

Trey Lance Girlfriend: Is He Dating Anyone?

Owing to his extremely private nature, none of his social hinted at Trey Lance ever having a girlfriend as of 2021. So, the possibility remains he wasn’t dating anyone at the time. Or, he was hiding his romantic life away from camera lenses.

Trey Lance is everything a girl desires. He is tall, handsome, and a promising athlete with a lucrative career. Trey must’ve had plenty of women vying to be his girlfriends. But, he never pondered and care to share his dating status.