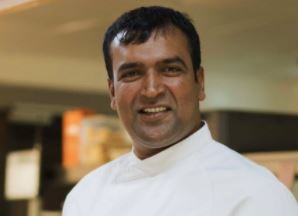 From the land of the Himalayas, Santosh Shah came far from his home to prove his worth at Master Chef UK: The Professionals 2020, and he was the candidate that judges were looking for!

Santosh advanced to the finals serving a popular Nepali (local: Newari) dish “Yamari” – with just a little western touch. Also, the judges were impressed by his take on the Indo-Chinese dish that included crispy chilly chicken, lotus roots, seaweed, and vegetable pickles; served with hot and sour soup.

So, who is this amazing chef, bringing his Asian twist to the top food show? Learn everything about Santosh Shah over this wiki.

Corresponding to his birthday, Santosh is of the Scorpio zodiac.

Born and raised in Karjanha, Siraha; a small village in Nepal, Santosh Shah grew up playing in the hills and gardens with his siblings. Reportedly, Santosh was the youngest of the seven and he was left alone at home after all his brother and sister moved away for work or after getting married.

As for his parents, Santosh’s father passed away when he was five years old and he was raised just by his mother. With financial instability, Santosh took upon work like selling farm produce, fruits, or bread in the market, just at the mere age of 9.

“School never got prioritized,” Santosh shared. He even failed SLC (grade 10) and did not have the patience to wait whole another year to re-appear for the exams. He added, “What was I going to do with the education given my circumstances?”

So, following what others in villagers did, Santosh headed to India to work at a hotel in Ahmedabad. His first job was at a five-star hotel and he was shocked to see “even those of us who washed dishes had to wear a uniform.” Soon influenced by a chef there, Santosh dreamt of becoming a chef one day.

Overall, Santosh had a tough childhood. But he shared that it was also the local spices and ingredients from his childhood that he took inspiration from. Like the colocasia leaf, growing up in his mom’s garden, that would later become a signature ingredient in his amazing dishes.

Santosh’s advice to the people tying for a better future was to “never stop learning, you are never too old to learn new things and to improve your craft.”

Also, Santosh had a self-titled Youtube channel with over 2.5K subscribers.

He worked as a freelance “executive chef” since April 2020 and defined himself as “an innovative Nepalese Indian Chef based in London.” If you are curious, an executive chef in London, England made around £50,220 ($66, 418).

For his education, Santosh attended IHCM, Baroda, Gujarat from 1998 to 2000 for a diploma in Hotel and catering management.

Talking about his Masterchef UK Journey, Santosh first entered the show showing off his filleting skills. He prepared a place with chicken butter sauce and judges loved it. Then, for his second test, he served a Nepalese-inspired grilled, spiced monkfish with sesame and tomato sauce followed by a mouthwatering “saffron boondi” dessert.

Santosh Shah remained private about his offscreen life. Though it was not confirmed that Santosh was married, fans stated a possibility that he has a wife and kids.

Unlike western culture, people from the east tend to get married earlier. They mostly believe that living together and having kids should only be done after marriage and the earlier the better. So, many were convinced that Santosh must have a wife, for he was already in his mid-30s.

As of 2020, all we know is that he was residing in London and might be cherishing the Freebird life as well.