Here’s everything you need to know about Kathryn, who when alone in her hotel room after a long day, loves to hear the nicest things her fans have to say to her on Twitter.

Of all the announcements shared by Marvel Studios head Kevin Feige during the Disney Investor Day 2020 call was news about Ant-Man 3 and its cast. And, there among it, was the name of Kathryn Newton.

Kevin disclosed Kathryn would also be playing Cassie Lang in the Marvel Cinematic Universe film Ant-Man and the Wasp: Quantumania.

Judging from her birthplace, we figured, she comes from her hometown of Orlando, Florida. When she was twelve, her family relocated to Los Angeles, where she attended Notre Dame High School.

Kathryn Newton, as Cosmopolitian confirmed, is an only child of very successful parents.

Her mom, Robin, used to be an airline pilot while her dad, David was dealing with business in China, sometime in the past. 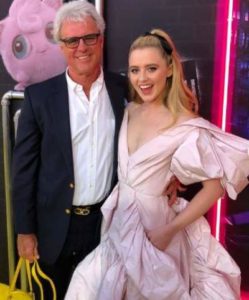 Kathryn’s father like any other parents wanted Kathryn to take over his business. So he insisted she learned Mandarin.

A businessman’s job was a big no from the future-actress, but she did ace the language which later came to assist her when interacting with the fans when the Detective Pikachu press tour brought her overseas.

Beauteous Kathryn Newton, in her glamorous physique and blonde extensions, stands to a height of 5′ 5″.

Being an actress, she goes through trying out new hairstyles and makeup almost every day. “You start to see flaws that aren’t really there”, she said, when asked about what she thinks about her body or her skin.

Nevertheless, Kathryn explained, she tries to ignore them and always eats whatever she wants.

She believes, “Everybody’s beautiful, and it’s not about what you look like to tell a story. It’s not. I’ve never looked at an actor and thought, Oh, she’s so skinny or Oh, she’s so fat. I’ve always just been moved.”

Kathryn Newton has worked professionally, as an actress, since she was 4 years old on All My Children.

But then she also insisted on going to high school in Los Angeles. “I’d go to my biology class, and my phone would start ringing because it was my agent”. And, as per the rules in school, she was not allowed to have a phone. At that time, she was either shooting for Paranormal Activity 4 or CW’s Supernatural, where she played rebel monster-hunter, Claire Novak, on and off since 2014.

More of her notable acting credits would definitely be the ones as Louise Brooks in the CBS comedy series Gary Unmarried (2008–2010), that of Abigail Carlson in the HBO mystery drama series Big Little Lies (2017–2019), and Allie Pressman in the Netflix teen drama series The Society (2019).

Some more movies and TV shows credits: Lady Bird, Little Women, Ben Is Back, Blockers, Mad Men, and others.

This way, the up-and-coming actress Kathryn Newton, who postponed college to pursue her acting career, bagged over $1.5 million, until December in 2020.

Kathryn Newton admitted to an interview in May 2019, that she never had a boyfriend. At the same time, she also confessed to the lack of hookups on the set of The Society contradicting her another giggly confession, “I love working with them because everybody is so hot”.

Kathryn, however, did not spill the reason for not dating anyone. Although, this is a fact about her, that she is not at all interested in dating actors. Because had she any, she would definitely be taking advice from Emma Roberts, who is been keen on playing Kathryn’s matchmaker.

A fun fact in regard, she googled herself to see who she was dating.

Not to mention, we found a post on her Instagram (containing 1.4m followers), of sometime in 2012, to which she wrote, “My Boyfriend”.

And the blurry picture is of her siding next to none other than younger-looking Justin Bieber.