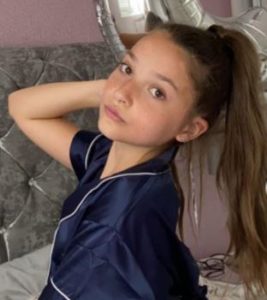 Today we are here talking about the young and beautiful actress Anya McKenna-Bruce. Anya is as adorable as she is talented as an actress. Her most popular project in 2020 was the British TV series Adult Material.

Read along to find out more about Anya and we bet you will fall in love with her as well.

Also, with her birthday on the 6th of June, her zodiac sign was Gemini.

What about the family life of Anya McKenna-Bruce? Well, her parents were actress Angela McKenna-Bruce and her husband (name not known). Her mother also has some relationship with the cinema. She was an additional crew in the movie Diversion.

Apart from her parents, Anya has two siblings, Ellis McKenna-Bruce and Mia McKenna-Bruce. One of her siblings, Mia is an even more famous actor than Anya. She, i.e. Mia, had acted in popular TV shows like EastEnders, The Dumping Ground, The Witcher, etc. However, Mia was most famous for her character Tee Taylor in Tracy Beaker film series.

Anya was born and raised in the Greater London area in England, United Kingdom. She belonged to British nationality.

Okay, Anya McKenna-Bruce was 13 years of age and a growing kid in 2020. So, her height and weight was a matter of time, changing. But so are so many other things here. Anyway, Anya was 4 ft 8 inches in height. And her weight was roughly 43 kgs.

Anya was not that big on social media, and it was a travesty. Some people have way larger social media reach, who are nowhere near as talented and deserving of love and praise as Anya.

On Instagram, she had only 5.2k followers. It might be because Anya was that not that frequent with her posts. Anya had only 10 posts and starting from August 2019. She also had another Instagram account, which was private and had only 88 followers.

Anya McKenna-Bruce started acting when she was only one year of age. Can you imagine it? Well, she acted in a TV series called Kingdom in 2008. Her next acting venture, however, was 8 years later in a movie called London Town.

Later that year, Anya appeared on the Wachowski sisters’ TV Show Sense8 for Netflix. She appeared on three episodes as Chelsea. 2018 was another big year for Anya with performances in TV series like Damned, Pls Like, and a couple of shorts as well, Rooftop Refugee and O Christmas Tree.

ITV‘s Cleaning Up was one of her most important TV series. Released in 2019, the show was about a single mother who starts to work as an insider trader to pay for her debts. Anya played Lily, the daughter of the protagonist.

After Cleaning Up, Anya worked on smaller roles in TV shows like Year of the Rabbit, Ghosts, The Rook. Her upcoming projects include the movies like Louis Wain, Zero, The Banishing, and shorts like City of Lost Children, Diversion, etc.

Such a small age and so many performances. As of December 2020, Anya’s net worth was assumed to be almost $200 thousand.

Anya’s most recognized role was in Channel 4 British drama series called Adult Material. The show was about a woman working in the adult film industry.

Adult Material had modest critical success. But Anya was rapidly becoming prolific, and there seemed to be some future for her.