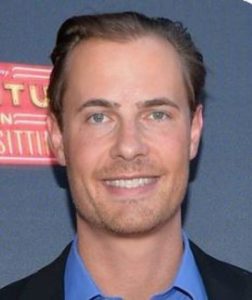 As per a 2020 report, Disney Channel’s hottie Erik von Detten who famously starred in The Princess Diaries was about to become a dad again!

His wife seemed to be on cloud nine as she took the news to her Instagram page, weeks before Christmas this year. The mom-to-be did not reveal the sex of the new baby. Erik, however, with a private Instagram account, had not commented on the family’s upcoming arrival.

Here’s everything you need to know about Erik and the arrival of his “Santa baby”.

Erik von Detten, with a leading man good looks and undeniable charm, stands to a height of 6′ 1″ (1.85 meters).

His mother Susan (Farber), is a photographer, and his father Volker von Detten is a German immigrant. Erik clearly acquired a blend of ethnicity from his dad and his mom of English and Russian Jewish descent.

Further, in a family of three sisters, Dolly, Britta, and Andrea, and a brother, Timothy, he was raised in Southern California.

Erik von Detten’s net worth was reported by celebritynetworth.com sometime in 2014 as $2 million. And several years later, the data, remained un-updated.

Where Is Erik von Detten Now?

Erik von Detten is known for his characters in Escape to Witch Mountain, Toy Story, Brink!, Meego, The Princess Diaries, Complete Savages, and So Weird.

Erik started his career with his earliest roles in the daytime soap opera Days of Our Lives, Toy Story, Christmas Every Day, Leave It to Beaver until he landed in a theatrical release of The Princess Diaries in 2001 as Josh Bryant. This Josh he played was so well-loved. He was everyone’s heartthrob making appearances at the center of every teeny-bopper magazine published around the millennium.

But eventually, people started seeing very little of him on screens.

Once so famous, he has been off the radar for quite some time, with very few credits like lending voice to episodes of Family Guy and Avatar: The Last Airbender. “My hat’s off to actors who can maintain a steady career for 30 years,” the actor candidly told Romper in 2018.

He explained at the time, that no matter how talented you are, making a career in the industry, is going to be a pretty big gamble.

So, after he was sure he wanted to get married eventually and start a family, he quickly realized he was going to need much more consistent work. And thus happened the commodities brokerage.

Now, Erik von Detten has been working a successful job in sales and has been busy in a happy married life. Although we also came to know, he has not completely forsaken his career as an actor. He continued acting from time-to-time, mostly by doing local community theatre in the spare time he could manage from his other jobs.

Looking back, he perceives himself and his former career, as “somewhat famous.” He explained,

“I never reached super fame, if you will. I was always kind of, under the radar at some extent, and I really enjoyed that actually because I think that if you become too famous I guess, you can’t really even have much of a private life.”

Today, Erik von Detten is happy he has found his place in the world, the way it was meant to be.

Erik von Detten, who had been married to his wife since August 2018, awaited the March of 2021 to welcome baby no. 2 with wife Angela von Detten. 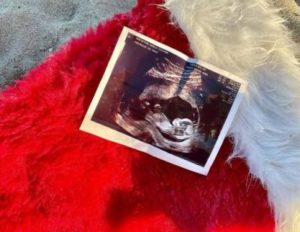 Although, neither Erik nor the mom-to-be revealed the sex of the new baby at the time. 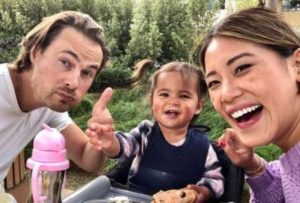 Be that as it may, we know, the new one was going to join 18-month-old big sister Claire Elizabeth von Detten.

Erik and Angela first met in September of 2014.

Born and raised in Los Angeles, alongside three siblings, Angela is very well versed in LA real estate. Her official website describes herself as someone who can advise you on everything from market trends to where to get the best chicken wings.

Previously known by the name Angela Chen, she is a certified realtor at Compass, a company based in Marina del Rey, California. She has been working in real estate since the year 2013.

For her education, Angela of Taiwanese-American descent studied BA in Sociology at UCLA and also went to Tamkang University and Peking University.