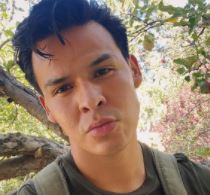 A new character “James Chee” appeared on Grey’s Anatomy season 17, and it was portrayed by the actor and writer, Robert I. Mesa. “James” was the first indigenous doctor to be ever portrayed on the show and with fans increasing love for the character, the producers bumped him up to be a recurring cast member.

So, while we know enough about Robert I. Mesa’s on-screen role, what was his personal life like? Keep reading this wiki to learn all about it.

Robert I. Mesa was 27 years of age as he first appeared on Grey’s Anatomy in 2021. He celebrates his birthday at the end of July, making him of the Leo zodiac.

Trivia: A few days after his 27th birthday, Robert’s family gave him a small belated birthday surprise. Which according to him was his favorite birthday of all time.

Robert I. Mesa’s parents are proud Native Americans. They venerated the Soboba culture, and especially Robert’s dad, he was associated with various Native American partnerships including the one with the Paramount Studios.

As for Mesa’s mom, though not much was known about her, she often appeared over Mesa’s socials on family celebrations and “mother’s day”.

Talking about his sibling, Robert has a brother named who went by the name “Kholan Garret Studie” @rav3nlunatic over IG. 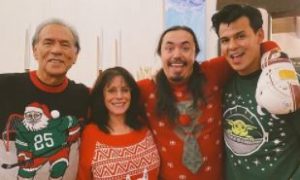 Robert I. Mesa with his parents and brother (Source: Instagram)

In light of Robert’s ethnicity, he is half Navajo and follows the Soboba / Dine’ Nation culture. Overall, he is a Native American to the core. In Nov 2018, he even took it to his IG to celebrate the “Native American Heritage Month”, posing alongside a man with traditional attire.

Robert hails from Santa Fe, New Mexico, and was living in Los Angeles, California in 2021.

Have you noticed an owl tattoo on a peony flower (his favorite flower) over his left arm? Well, Robert got it as a homage to his Soboba culture, but unfortunately, instead of bringing luck, the tattoo left him hospitalized for over two months. The doctors could never find the reason for the ink poisoning.

“In Soboba, I was told that owls are good luck when I was a little boy. It was one of the last things my biological parents told me before everything. I just had that ingrained in my brain.”

About Robert I. Mesa Role On Grey’s Anatomy

Robert I. Mesa’s character, “James Chee” was first introduced as one of the interns at Grey Sloan Memorial Hospital during the COVID-19 pandemic. However, just at the start, he was hazed by neurosurgeon Tom Koracick (Greg Germann), and forced to work in data entry.

Excited to portray the first Indigenous Doctor on Grey’s Anatomy, Robert also took it to his FB to share how much it meant to “his Indigenous Peoples”.

Grey’s Anatomy could be Robert’s big break in the entertainment industry. However, he has worked in a few other TV shows before that as well. Some of which are — Alberto in From Dusk Till Dawn: The Series (2016), Tecumseh in The Men Who Built America: Frontiersmen (2018), and Al Momaday in American Masters (2019).

As of 2021, he had yet to take on any big movies and was represented by Mitchell & Associates Talent and Citizen Skull Productions/Management.

Apart from acting, Robert was interested in photography as well. A self-taught photographer and filmmaker, Robert has exhibited in Los Angeles, CA the Heard Museum Phoenix AZ, and the Santa Fe Indian Market where he won first prize in photography in 2015.

Furthermore, he has also worked as a freelance photographer, and official photographer for SWAIA Indian Marker, and Peyote Bird Designs.

In light of his education, Robert graduated from the Institue of American Indian Arts with an associate’s degree in “creative writing and filmmaking” in 2010.

As of early 2021, Robert I. Mesa didn’t have a girlfriend or a wife. He mentioned that he was “single” and interested in “women”.

However, this may change anytime soon. With Robert’s growing popularity over Grey’s Anatomy, ladies were falling head over heels for the actor. Maybe, we’ll get to hear about his dating life anytime soon.