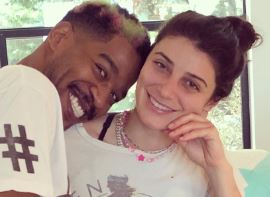 In April 2021, Kid Cudi hit the headlines after wearing a dress during his SNL performance. Inevitably, it gave rise to gay rumors. However, many noted the dress was a tribute to the late-Grunge Rock king, Kurt Cobain.

In this Raquel Deriane wiki, become familiar with Kid Cudi’s girlfriend. In doing so, read about her age, ethnicity, and job. Similarly, find out her height, Instagram, and family.

Read Also: Abby De La Rosa Wikipedia: Net Worth, Who Is She, Age

Some entertainment websites noted Raquel Deriane was 28 years of age as of April 2021. Reportedly, 1992 is her birth year.

Also, Raquel receives birthday wishes on 16th September. On her 2020 birthday, Kid Cudi shared a photo of them on Instagram and wrote— “Ahhh!! Happy Birthday to the amazing and beautiful Rocky!! I love you so much and I hope u have the most perfect day!! U deserve all the love!! @therockyd”

Based on her date of birth, Raquel was born a Virgo. What’s more, her nickname is “Rocky”.

One look at Raquel Deriane, everyone can tell she carries Caucasian genes. However, her ethnicity remains a private affair. Nonetheless, she spoke against social injustices.

As of 2021, Raquel was residing in Los Angeles, California. Maybe, The City of Angels is her hometown. That said, Raquel’s Facebook didn’t list her native land.

Raquel is the daughter of Raoul Deriane. Raoul, according to his Facebook, worked at M&C SAATCHI. Meanwhile, Raquel’s mother appeared in a June 2020 Instagram post. On it, she praised her mother for raising the best kind of people.

Besides her parents, Raquel also had a brother named Georges Deriane. George was available on both Instagram and Facebook.

What’s more, Raquel shared a strong bond with her grandfather. Instagramming a photo of them, she once wrote— “My grandfather is truly my chosen best friend. From the get, we related to each other in an ineffable way… and he’s just my dude, my man, and my heart. Here’s a slightly damaged picture of us a long time ago. #jiddo”

Also, besides owning a toned body, Raquel has gorgeous hair. Back in 2019, she hacked off 6 inches of her hair.

Elsewhere on Instagram, Raquel had 32.1 thousand followers as of April 2021. Furthermore, she followed more than 1 thousand people on the app.

Raquel Deriane is an actress and costume designer.

According to her IMDB profile, Raquel has acting credits on “Marzipan,” “The Stiff,” “Anna Clendening: Dead End,” and “Chasing You”.

Meanwhile, as a costume designer, Raquel has worked on numerous projects including “L.A. Rush,” “Soul Survivor,” “How’dy!,” and “Shrimp”.

In 2013, Raquel graduated from Univesity Of Southern California, having joined them in 2010. There, she studied gerontology. Opening about her major, Raquel said— “This field is very in-demand but not enough people are doing it. I want to change the world!”

From her career, Raquel surely earned more than $250 thousand in net worth.

In an interview with LA Mag, Raquel revealed she supported the marijuana culture. She shared— “People are bored at home and smoking weed much more. This year, I’m getting all my pothead friends luxury blunts.”

As of 2021, Raquel Deriane and Kid Cudi were still dating.

Before Raquel, Kid Cudi enjoyed romantic flings with Jamie Baratta, Stella Maeve, and Jacqueline Munyasya. With the latter, the “Mr. Rager” singer has a child.

A supportive girlfriend, Raquel promoted Kid Cudi’s latest album released in December 2020. February that year, she shared a video of them celebrating his birthday. Raquel’s caption read— “A perfect night celebrating this guy. Through it all, you always rise to do and be better. You fucking inspire me. And you funny too 😊. Love you @kidcudi happy fucking birthday!!!!!”

Raquel is also an inspiration behind Kid Cudi’s song “Sept. 16” which happens to be her birthday. On the record, Kid Cudi croons— “Lay awake in bed and I’m alone / (Remembering) / Runnin’ through my brain and I’m searchin’ for you, oh no.”