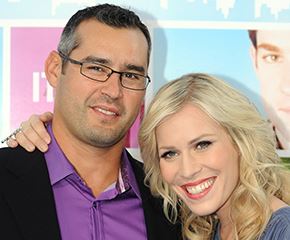 Meet Matt Robinson, popular as the husband to the Unwritten singer, Natasha Bedingfield.

In April 2021, Natasha appeared on TikTok alongside @gleefuljhits dancing to Unwritten, which was a viral dance challenge of the month. The dance got social media in a frenzy and fans were once again curious about Natasha; especially, about her married life and husband.

So, here we are shedding light on Natasha’s other half over this Matt Robinson wiki.

As per his birthday, Matt is of the Aries zodiac.

Matt Robinson hails from California and flaunts an American nationality. However, his wife Natasha — who is English — kept her identity and had yet to become an American citizen even years after she married Matt.

Before 2021, Matt resided in Los Angeles, where he moved from Santa Monica CA.

Trivia: Matt’s invited two “Jake Robinson”s to be his groomsman, who perhaps could be his brothers.

Mentioning his distinct features, Matt has brown eyes, liked to trim his hair short, and wore glasses. He is a handsome man, and to Natasha, he was even “hotter than David Beckham”. Over an interview, she described him as,

“My fiancé Matt is hotter to me than David Beckham. ‘He is honest, funny, charming, and hot.”

No, Matt Robinson wasn’t found on Instagram and Facebook as of April 2021. However, he did pop up from time to time over Natasha’s IG with 199K followers then.

Matt Robinson is a California businessman. Though not much was shared about his job, Natasha claimed that his work brought balance to her career. In her words,

“He’s a businessman, and it really is a good balance for my career because he’s always a solid rock that I just feel very comfortable with, and I feel very loved.”

Together, Matt and Natasha owned a  $1.65 million Spanish villa above Los Angeles’s historic Beachwood Canyon and directly below the iconic Hollywood Sign. It was later put up for rent at $14,500 per month. Also, Natasha solely owned a larger, decidedly more contemporary residence in L.A.’s Los Feliz arena which was put up for sale at $4.495 million in 2017.

As wealthy as the couple was, they were also blessed with a humanitarian soul. In Oct 2017, the duo attended an event organized by  Kenneth Cole for amfAR, The Foundation for AIDS Research.

Natasha even endorsed the foundation over her Facebook, and wrote,

In light of Matt’s education, he is a Van High School graduate.

Matt Robinson was first introduced to Natasha Bedingfield by his friends at a video arcade in 2006. Soon, he asked her out on a date to see the Superman movie. The rest is history.

Dating for two years, the two then got engaged in September 2008 and married in March 2009 at the Church Estates Vineyard in Malibu, CA. Reportedly, the ceremony was attended by around 150 people. According to Natasha, their “wedding day was everything (they) hoped it would be — simple, beautiful, and natural.”

After 8 years of marriage, Natasha finally shared the good news that her fans were longing to hear. She took it to her IG in Oct 2017 to announce her pregnancy, and in Dec 2017, her son Solomon arrived.

Unfortunately, their kid got a brain tumor as he turned 2. Solomon had to go through multiple surgeries for an infection in his brain, and thankfully, everything went all right.

As of 2021, their son was doing well, and Natasha even had him dance alongside her in her own version of the Unwritten TikTok challenge. She confessed that the 2020 pandemic was a blessing in disguise for her — singing, dancing, and overall, getting to spend quality time with her kid, What could a mom ask for more.