It feels sad to know that the person you’ve rooted for didn’t make it to the top, and even sadder when they drop out a few steps away from reaching the top. American Idol contestant, Wyatt Pike was one of the heartbreakers who unexpectedly “quit” the competition after making it into the top 12.

So, what was his story? Stay till the end of this Wyatt Pike wiki to find out.

In the April 12 ep of American Idol, host Ryan Seacrest revealed that Wyatt Pike “had to drop out” of the show but didn’t mention why. Later, a rep for American Idol spoke, “Wyatt could not continue due to personal reasons.”

But by the time the news of him leaving the competition was made public, Wyatt was already in his hometown in Park City, Utah. So, rumors had that Wyatt went home for an unauthorized visit when he was supposed to be in quarantine, and that might have done it for him.

Whatever his reasons may be, Wyatt’s last performance on American Idol, “Use Somebody” by Kings of Leon, will forever be etched into our hearts, and we wish him the best for his future.

Wyatt Pike was 20 years of age as he suddenly dropped out of the American Idol in 2021.

Information on his birthday wasn’t shared.

Wyatt Pike was born to parents Buster and Heather Pike. His father, Buster was the co-founder and managing director of Hydro Studios for over 9 years. Also, he was the president of the Park City Sailing Association. No wonder, his socials were filled with pictures of sails.

As for his mother, Heather also loved sailing, and it was her love for sailing that brought her close to Buster. The two then married, as Heather turned 26. She turned 50 on May 29, 2020.

Have you see Discovery/BBC IMAX film, The Human Body, from back in 2000. Well, nevertheless, Heather was the subject of the documentary, and also Wyatt’s birth was featured over it.

Talking about Wyatt’s siblings, he has a sister named Hazel Pike. She was often seen in Wyatt’s family pictures, dated 2019. (She was the one with pink hair). 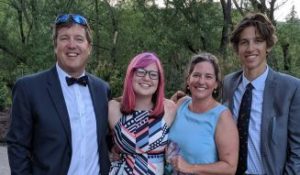 Wyatt Pike with his parents and sister (Source: Instagram)

Wyatt Pike’s net worth was under $200 thousand in 2021. But this would change any time soon. He had already released a few of his original music, which was available on Spotify. Some of the popular included Best of You, Diana, and Because of Me.

Talking about how it all started, Wyatt claimed that he has been strumming a guitar ever since he was 3. He received a half-size guitar from his parents as a child, and whether he could actually play it or not, Wyatt now is a master at it.

As for his education, Wyatt always dreamed of dropping out and moving to a big city to get discovered in music. But his parents didn’t support his idea of solely pursuing music. Instead, after Wyatt’s freshman year at Park City High School, they sent him across to Boston where he partook in a weeklong songwriting camp at the Berklee College of Music.

So, Wyatt never dropped out of high school. However, he did take a one-year break from the College of Charleston seven days before orientation to focus on music. Later, he applied to the Berklee College of Music and was studying there.

Wyatt Pike isn’t gay. Though some may argue that Wyatt was one, but hey, who doesn’t have haters.

Wyatt Pike chose Annie Sunderland to be his prom date in Nov 2019. However, it was unclear if the two ever went on to become girlfriend boyfriend. Also, Wyatt uploaded a picture of them over IG to reminisce the day. His caption wrote, “beauty & the beast”. To which, Annie replied, “thanks for taking me!!”

As of 2021, Wyatt shared nothing about his dating life. However, fans had a theory that Wyatt and his top 12 American Idol co-contestant, Cassandra Coleman were dating on the side.