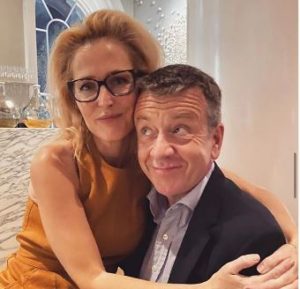 Peter Morgan earned fame in the movie industry as a producer and scriptwriter. With his degree in Fine Art, he earned recognition for writing movies and TV shows such as The Queen (2006) and The Crown (2016-2020).

Not only that Peter Morgan was once also in a relationship with a beautiful actress Gillian Morgan. But the questions remained, what led to their break up?

Well, scroll down this article starting with the question: Who Is Gillian Anderson Partner?

Peter Morgan, Gillian Anderson’s former partner, was born on 10 April 1963 in Wimbledon, London. He turned 57 years old while celebrating his birthday in April of 2020. What’s more, he owned Aries as his zodiac sign and is defined by ambition, vigor, and creativity.

Other than that, Peter preferred keeping information on his other family member a secret including his siblings.

Unfolding details on his romantic associations, Peter Morgan was previously married to his ex-wife Lila Schwarzenberg, born- princess Anna Carolina Schwarzenberg. The couple tied knots with each other in 1997.

More on his ex-wife, Lila belongs to an aristocratic family and was born to her parents Karel Schwarzenberg and Therese Hardegg in Vienna, Austria. The married couple went on having 5 kids and lived in both Vienna and London.

However, the couple’s marriage hit a rough patch. Lila also openly spoke about the relationship in a column in an Austrian society magazine. Speaking on the marriage Peter Morgan uttered,

‘We are so wildly chalk and cheese . . . She’s sociable. She loves children . . . Lila’s idea of heaven is a noisy house, people running through it, and that goes some way to describing my idea of hell.

As Daily Mail reported, Peter and Laila agreed on separation however didn’t agree upon divorce. But the couple concluded and eventually signed the divorce paper in September of 2014, three years after the birth of their 5th child.

Why Did Gillian Anderson and Peter Morgan Break Up?

On 28 October 2016, Daily Mail confirmed and reported that Peter Morgan found himself an actress named Gillian Anderson. As the paper confirmed, the couple attended a party in New York where they revealed they were in a relationship.

Gillian Anderson revealed being a bisexual to Out Magazine in 2012. So, most believed the couple’s relationship was nothing more than an affair.

But watching the couple working together in the movie The Crown, created by Peter Morgan, many thought they were still dating. Plus, when Gillian spoke to Time Magazine in February of 2018, she addressed her dating status and confirmed their on-going relationship.

As for Gillian Anderson, her first husband was Canadian TV art director Clyde Klotz. The pair tied knots in 1993 and eventually divorced in 1997.

Secondly, she dated Mark Griffiths with whom she had two children, Felix and Oscar. But they moved separate ways in 2012.

After 4 years of dating, Peter Morgan and Gillian Anderson called it quits in 2020. Daily Mail columnist Baz Bamigboye was the one who broke the news. Speaking to PEOPLE, a source hinted that their demanding schedules caused their relationship to fall apart.

What Is Peter Morgan Net Worth?

As of this writing, Peter Morgan stacked a total net worth of $4 million which he earned from movies and TV shows.

Peter Morgan has received 28 credits in total as a writer in his career that spanned three decades. He started as a scriptwriter for TV shows until the start of the 2000s.

However, the TV show The Jury (2002) earned him wider recognition and fame after its success. Then, he went on to contribute to several movies and TV shows as a writer including The Deal (2003), The Last King of Scotland (2006), Longford (2006), and The Queen (2006) which earned actress Helen Mirren the prestigious Oscar award.

Peter Morgan is also the creator of The Crown (2016-2020) where his girlfriend Gillian Anderson plays the lead role of Margret Thatcher.

Being able to date someone like Gillian Anderson isn’t common for all people. One either has to be seriously talented or seriously handsome for that matter.

But, Peter Morgan possesses all of the necessary qualities which make a man attractive to women. He stands tall at the height of 6 feet 1.5 inches (1.87 meters) making him look dashing.

Whereas, Peter weighs about 82 kilograms (180 lbs) which is visible because of the fat on his torso. Moreover, he is likable and has a charming personality which attracts women.

More From Us: Jaymes Vaughan Wiki: Net Worth, Jonathan Bennett