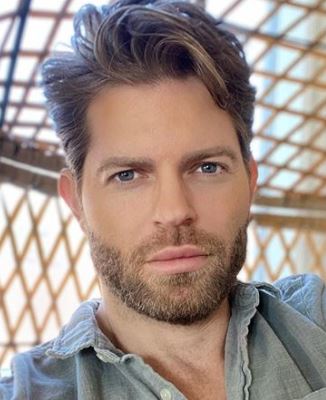 While Jonathan regularly appeared on the Tv screen; from participating in Celebrity Big Brother to hosting Holiday Wars, Jaymes didn’t fall behind in fame. He was the host of the entertainment news show Celebrity Page and previously participated in the 21st season of The Amazing Race 2012.

Here is everything you need to know about Jaymes over this wiki.

Corresponding to his birthday, Jaymes is of Aries zodiac.

In a family of five, Jaymes Vaughan grew up in his hometown Chesterfield, Virginia. He has a brother named Jason and a sister named Receta. All the siblings attended Manchester High School there.

Talking about his parents, Jaymes’s father Ed Vaughan served in the United States Marine Corps. On November 12, 2016, Jaymes uploaded a picture of his dad over Facebook to wish him “Happy Veterans Day.” He wrote,

“My Hero. My Dad. Happy Veterans Day.
Next time you see a service man or woman, even if it’s not a holiday, tell them thank you. We wouldn’t be free without them.”

His mother, Elsie Vaughan is from Lancaster, Virginia, was the director of Shaklee Corporation. She studied business at VCU and lived in Midlothian, Virginia.

Mentioning his distinct features, Jaymes is a handsome man with deep blue eyes and dreamy hair. Also, he had a ripped body.

Also, find him over Facebook @jaymesv with 12.2K followers.

You may like – Caroline Giuliani Wiki: Partner, Gay, Net Worth, Job, Height

Being an actor, reality star, and host, Jaymes has marked his presence in the entertainment industry. He played the role of Adonis in the movie Chocolate City: Vegas and an officer in Baby daddy (2014).

If you didn’t know, he was also the host of the Chippendales World Tour. Moreover, he was the first openly gay member of the stage show.

As a contestant, Jaymes participated in The Amazing Race in 2012. Though he didn’t take the trophy home, Jaymes shared that he was satisfied with the results. In his words,

“CBS did an amazing job with that show. It is really true to life what happens. There is no manipulation. They don’t change things to make you a good or bad guy.”

At the time, his dad was sick as well and that was the reason why he joined the show. He wanted to get his dad into an “experimental cancer program that cost a million and a half dollars.”

In light of his education, Jaymes studied Mass Communication at Virginia Commonwealth University.

Recalling the first introduction with Jonathan Bennett in 2016,  Jaymes Vaughan shared that Jonathan had appeared on one of his shows to promote the Food Network program, Halloween Wars.

After the interview, Jaymes took it to his Instagram to post a lovely picture of them and labeled Jonathan as “the talented charming” guy. Maybe he was already head over heels from Jonathan then.

Unfortunately, it was unclear when the duo exactly started dating. Jonathan came out in 2017 and Jaymes was the first person who appeared linked with him. These two were quite the TV power couple then.

As of Nov 2020, the lovebirds were going strong. In addition to sharing the same career field, Jonathan and Jaymes also shared the same political perspectives. In the 2020 election, they both supported Mr. Joe Biden.

Talking to PEOPLE Magazine in late-Nov 2020, Jaymes and Jonathan announced their engagement. Their elaborate proposal featured an original song written by Jaymes.

Even before Jaymes took the knee, Jonathan claimed he realized the proposal was going down.

Since getting engaged, Jaymes revealed he was giddy about every single thing. About their upcoming wedding, Jaymes expressed he wanted something classic and timeless.