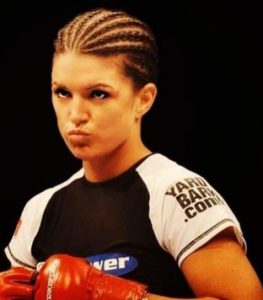 Lately, in November 2020, Gina became the talk of the town for a tweet of hers that mocked masks during the coronavirus spike. So much so, followed by a tremendous Twitter backlash, fans called for Disney to fire the actress from the show Star Wars: The Mandalorian.

Here’s everything you need to know about Gina Carano including her husband, boyfriend, and net worth!

As of 18th Nov 2020, Disney had not yet responded to the fans’ backlash. This happened as Gina Carano was set to appear in the second season of space Western streaming television series The Mandalorian.

Gina had shared a meme on her Twitter that read:

“BREAKING NEWS: DEMOCRATIC GOVERNMENT LEADERS NOW RECOMMENDS [sic] WE ALL WEAR BLINDFOLDS ALONG WITH MASKS SO WE CAN’T SEE WHAT’S REALLY GOING ON.”

And shortly the Disney fans went right after her, prompting a new hashtag i.e. #FireGinaCarano.

The Trinity Christian High alum was born as Gina Joy Carano on 16th April 1982 in Dallas, Texas, the United States.

She is the daughter of Dana Joy and professional football player Glenn Carano. More in the family is her two sisters: one older and one younger.

Gina was raised by her mother after her parents divorced.

Sometime before, she also commented on having “just a small percentage of Italian” ancestry.

She began training in muay Thai before transitioning to competitive MMA. She competed in Strikeforce, EliteXC, and was featured in ESPN The Magazine as well as Maxim.

All in all, the allrounder compiled a competitive record of 12–1–1 in muay Thai and a 7–1 in women’s MMA.

Over the course, Gina happened to be on the receiving end of many accolades. Sometime in 2008, she was profiled in a feature story for the ESPN series E:60 and was voted “Hottest Woman In America” by Big Biz Magazine.

The same year “Gina Carano” was the fastest-rising search on Google and the third-most-searched person on Yahoo!. She was also ranked as no. 5 on the “Top Ten Influential Women of 2008” list on Yahoo!

The following year, she made it to no. 16 in Maxim’s Hot 100 list, and became one of the cover athletes along with Serena Williams for the 2009 edition of ESPN The Magazine’s Body Issue.

She has pursued acting since she retired from the MMA competition. She made her film debut in the 2009 direct-to-DVD martial arts film Blood and Bone and since then appeared in the movies Haywire, Fast & Furious 6, Deadpool, Daughter of the Wolf, Madness in the Method, and a few more.

Gina Carano did not have a husband until the time of this writing (Nov 2020). However, she sure seemed to have reconciled again with her on and off boyfriend Kevin Ross.

She started dating Kevin who is a professional Muay Thai fighter in the starting days of her MMA career i.e. in the early 2000s. It is said Kevin was the reason she got involved in Muay Thai. Gina and her boyfriend broke up four years later and only to rekindle the romance in 2015. 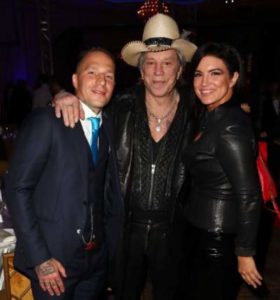 Kevin had confirmed with TMZ that they were apart for a decade and got back together on the 14th anniversary of the day they first met. He also confessed his love for Gina at the time:

“Gina is not only the reason I’m even doing what I am but literally the reason that I’m even alive and walking around still. You are my inspiration, my best friend, my everything!!!”

And as proof of their continued relationship is an Instagram post Gina shared on the day Kevin was born, in 2020.

On 28th July, she wrote this to a short video of Kevin playing piano:

“I am who I am because you came along and believed in me when no one else did..
Thank you for never giving up on yourself and never giving up on me.. no matter how hard I tried to get you to..Happy birthday. 😊❤️ my one of a kind.”

Besides, there were a few other times she publicly went out with other partners.

Sometime before, the University of Nevada, Las Vegas grad was linked to another martial artist, Kit Cope.

And, between 2012 and 2014, Gina dated the famous British actor, Henry Cavill. The Witcher actor who also recently played Sherlock Holmes in the Netflix movie Enola Holmes started dating Gina after meeting her at Jessie J Live In London in August 2012.

In the meantime, for almost two years, they turned heads as Hollywood’s hottest couple.

Next: Micah Plath Wiki: Net Worth, Height, Weight, Who Is He?