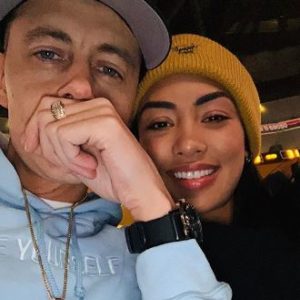 Organik is the face of KOTD but only a very few know about the background he came from. Not only he was a celebrated rapper in Canadian battle rap, but he got crowned the winner on several events.

Scroll down as the details on Organik Hip Hop unfolds details on his rap career, baby-mama, and bio as a whole.

Organik celebrates his birthday every year on 20 November. He turned 31 years old while celebrating his birthday in November of 2019.

Per his date of birth, Organik secured Scorpio as his zodiac sign.

Born as Travis Fleetwood, Organik was born to his anonymous parents. While his father was a truck driver and was on the road often, his mother worked as a Walmart tax manager. Other than that, no further information on his parents surfaced on the public records.

More on his family, Organik grew up with his elder sister Ang Fleetwood. His sister married the one named Shane Brooks. However, the current whereabouts of Ang and her husband remain obscure.

As for the nationality, he hailed from Bolton, Ontario which made him a Canadian Citizen.

Organik is not only handsome but he also stands tall at the height of 6 feet 2 inches (1.87 meters). Moreover, he weighed 76 kilograms (167 lbs) at the time of this writing.

Moreover, Organik was never spotted growing mustache and beard and has a big forehead which happens to be his distinct features.

Moreover, Organik is also on Facebook with 23,054 followers at the time of penning this piece.

Hip-Hop found its way into the life of Organik at a very young age. He grew up listening to several rappers from New York and buy the albums. Not only that, he would loop the beat at the end and freestyle, as he was never the one to sit and write lyrics.

Travis attended The Humberview School and was introduced to hip hop heads who go by the name North Syn. Every weekend, the group assembled at a rundown house where they show off their skill as a rapper.

Likewise, he also tried to find the lover of hip hop and battle online. Organik often credited these rap battles for helping his pick up and improve on several skills and rhyme structures.

Organik entered his first rap battle at the tender age of 16 with a fake ID. And to everyone’s surprise, he actually won.

Disappointingly, the Canadian battle star suffered pneumothorax which caused him to remove half of each lung.

After surgery, Organik started working at a steel plant in his hometown of Bolton. But even after the surgery, he hadn’t given up on his dreams to become a rapper.

More on his rap career, both in 2006 and 2008, Travis won BET’s Canadian Spring Bling. Likewise, he became Tronto Champion in a two-on-two rap competition in 2007. He was promised an appearance at BET Freestyle Fridays but got duped by the show’s organizer.

And this was what gave birth to King Of The Dot (KOTD). The first battle of KOTD went down in an alleyway near Yonge and Shuter streets. And has become one of the respected rap battle leagues worldwide.

As for his career, he also battled with battle rap’s infamous rapper, Dizaster, in the United States. Apparently, Dizaster made fun of his battle league. To prove his worth and to put respect on his name and the battle league, transpired the battle.

On 10 February 2020, Organik debuted a mystery girl (possibly his girlfriend) on Instagram. He posted a series of photographs of the couple together.

However, the host of the KOTD avoided sharing further information on the pretty lady. But going by the couple of pictures which he posted, the pair were definitely an item.

Had the best year of my life and owe a lot of it to meeting this girl. Happy Birthday to my best friend / prettiest girl I know / partner in crime

But, no further development on the relationship surfaced on social media. So, the post made sure of one thing that, in the backdrop of KOTD, Organik is not married and doesn’t have a wife.

Since Organik doesn’t seem to have kids, the chances of him having a baby-mama are highly unlikely.