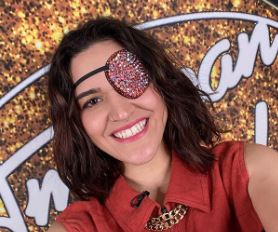 The American Idol constant, Andrea Valles wore a bedazzled eye patch over her left eye as she appeared among the top 24. And while some guessed that it was a part of her outfit, it seems that Andrea underwent surgery a week before.

Andrea Valles entered American Idol with her own rendition of Fleetwood Mac’s “Landslide”. However, judge Katy Perry wasn’t pleased enough with her singing, and thought that the performance was too “linear”. So, Andrea was prompted to have a second go.

For her second song, Andrea sang Tones And I’s “Dance Monkey”, after which Luke Bryan labeled her as “a star”, and she was handed the golden ticket.

Moving on to the Hollywood Round, Andrea was then grouped in the “Pop” category where she performed “Lay Me Down” by Sam Smith. As for the Showstoppers Round, she sang “Blinding Lights” by The Weeknd.

Chosen to become the Top 24 semifinalist, Andrea captivated everyone with “Lo Vas a Olvidar” by Billie Eilish  & Rosalía, followed by a duet with Brian McKnight singing “Careless Whisper” by George Michael.

Moreover, Andrea also charmed her fans wearing a barn red two-piece, and a matching eye patch. But the bedazzled eye patch wasn’t part of her costume, rather she then just had a retina detachment surgery. She said,

“You have to learn to push through and just roll with the punches.”

As per her birthday, Andrea is of the Gemini zodiac.

Andrea Valles was born to parents: Helen Valles, and an anonymous father who left this world over two decades ago. Her mother, Helen was then married to Larry Gonzalez (Andrea’s stepfather). We also saw Helen, praying for Andrea outside the American Idol’s audition room.

But Andrea’s mom wasn’t the only support she had in the family. Her sister, Eva Valles Flores equally rooted for her, although she wasn’t physically present there. Eva then was working as a marketing specialist at Revalution World, and also owned EJI Professional Coaching in Hoston, Texas Area. She was married to Jordee Flores who was a barber by profession.

As for her hometown, Andrea hails from Houston, TX. However, her family moved from Houston to Venezuela to Salt Lake City and finally settled in Katy, Texas.

Since her family was from Venezuela, Andrea might hold Mestizo ethnicity. No wonder, her Spanish is top-notch.

Also, she was present on TikTok @andreapvalles with 233 followers and had a self-titled Youtube channel with 4.65K subscribers.

As for her music, she has released a few originals that were available on all music streaming platforms. Some of her popular songs include The Chase, Alright, Photogenic, Mi Casa, and The Heist.

In light of her education, Andrea graduated from Cypress Lakes High School when she was 17. Then she briefly attended Lone Star College, before making up her mind to be a full-time musician.

Before appearing on American Idol, Andrea was part of a wedding band called Drywater.

As of 2021, Andrea Valles had yet to shed light on her boyfriend. However, for those who can’t wait, we have some information for you!

Digging around a little over Andrea’s past tweets, we stumbled upon screenshots of conversations that happened between Andrea and her boyfriend (who was named Habibi over her screen). The two discussed making a “Bf does MY make up tag” for Andrea’s YouTube channel, where Andrea finally convinced Habibi.

Following up on the matter, Andrea and her boyfriend then seemed to have made the Youtube video (now deleted) and also made a deal about making a “gf does bf makeup” video (which never came).

So, as of early  2021, it was a mystery if the duo is still dating, or have gone their separate ways.