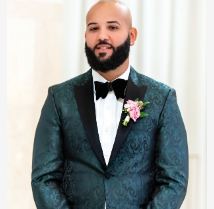 Vincent Morales is one of the single individual starring in season 12th of Lifetime’s Married At First Sight. The relationship experts matched him up with Briana Morris and the couple garnered attention even more.

Among the details, people wanted to know about him, Vincent’s company his race, and his past relationship turned people’s heads!

Vincent Morales turned 27 years old while Lifetime’s Married At First Sight premiered on TV. However, he never divulged information regarding his precise date of birth.

Because of this reason, his birthday and zodiac sign remains obscure as of the time of penning this piece.

Vincent Morales was born to his anonymous parents in his hometown of Santo Domingo, Dominican Republic. Owing to his private nature, he is yet to reveal information on his father and mother.

As of this writing, Vincent resides in Atlanta, Georgia. Besides that, no further information has been revealed about his family.

Vincent Morales is on Facebook where he has been followed by 16 people. He was also on Instagram but has deleted his account ever since the announcement of him being on Married At First Sight.

However, Vincent is nowhere to be found on Twitter.

Talking about his physical appearance, Vincent Morales stands tall at the height of 5 feet 11 inches (1.80 meters). Though the show presented him with facial hair which gave him that gritty look following that trend of men’s fashion, he also looks dashing when clean shaved.

Moreover, Vincent weighed 88 kilograms (194 lbs) but has been fluctuating for a while.

Starting with the education of Vincent Morales, he attended Easton Area High School. He graduated from the school in 2010.

Vincent Morales landed the full-time job of client advisor at United BMW. He worked for the company until October of 2016 in Duluth, Georgia.

After the job, Vincent joined Audi Atlanta immediately after leaving the job. The reality star also started working in Mercedez-Benz of Buckhead as a sales associate.

After leaving a job at Audi, Vincent focused entirely on working as a Chief Executive Officer at VMR Enterprises USA LLC. Starting in May of 2020, he took over as the president of VMR Auto Sales, LLC.

Coming to his career as a reality star, Vincent starred in the 12th season of  Lifetimes’ Married At First Sight (MAFS). He starred alongside his other partner Briana Morris in the show as one of the five couples.

As the show revealed, Briana Morris is a year older than him, but that is nowhere near affecting their relationship. Not only that, but they also earned recognition as a bi-racial couple. When @mafslifetime revealed the couple, fans were excited and rooting for Vincent and Briana.

A piece of trivia about Vincent Morales: He is also fluent in Spanish.

Owning multiple businesses, and working in a car dealership, Vincent made quite an impressive salary contributing to his net worth. Whereas, his total net worth accumulated to summing up in $800 thousand.

Before Briana Morris, Vincent Morales was prepared to commit to his former lover. But, his previous partner couldn’t match up to his affection, and the relationship between the two ended in no time.

The experts from the TV show matched him up with Briana Morris and he expected her to value his belief system and believed she was the salsa partner he had been looking for. Plus, he expected the relationship between the two didn’t end up in the same fate as his previous ones.

When the revelation of the new couple hit the floor of LIPSTICKALLEY, fans of the show had things to talk about, and most people loved discussing Vincent and Briana. A few of the commenters wanted to know whether the reality star recognizes himself as Black or not. If he did, then the couple would become the first interracial couple.

While others talked about Vincent’s family background and whether he belonged to a messy family. One commentator named bnsxo0 compared the couple with Chantel and Pedro from 90 Day Fiance. bnsxo0 argued the show matched two black people of different skin tones.

Talking about Briana, she worked for EXIN Holding BV. She previously worked in the GAP before her job as a computer engineer.