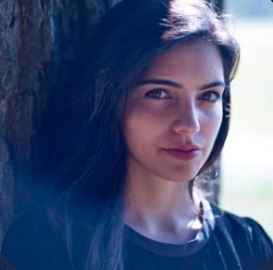 Riz Ahmed, a British-Pakistani actor, rapper, and activist got married in January of 2021 in a “super intimate wedding”. However, only after the details of his wedding, he revealed that his wife was Fatima Farheen Mirza, a novelist, and author of the book A Place For Us.

Fatima Farheen Mirza was born on 10 April 1991. She turned 29 years old while celebrating her birthday in April of 2020.

Per her date of birth, Fatima secured Aries as her zodiac sign.

Fatima Farheen Mirza was born to her parents in the San Francisco Bay Area in California, the United States. Her father hailed from Hyderabad, India and her mother belonged to a British-Indian family. Other than that, further information on her parents is yet to be revealed.

Moreover, any information that existed on her possible siblings remains obscure as of this writing. However, in an Instagram post dated 6 March 2018, she mentioned having brothers.

In fact, the Mirza siblings were raised in the Bay Area in California.

Fatima Farheen Mirza stands tall at a height of not more than 5 feet 6 inches (1.67 inches). Whereas, she weighed 53 kilograms (116 lbs), a proportionate weight thanks to her average height.

The Indian-American author is blessed with a light brown complexion, dark brown hair, a beautiful face, and a smile that can light up the room.

Coming to social media reach, Fatima earned a total of 12.6k followers with a verified account on Instagram and growing. She uses the platform to demonstrate her love for artistry.

Moreover, she was also on Twitter with 6122 followers. However, she is hard to keep trail of on Facebook.

Fatima Farheen Mirza attended the University of California-Riverside. She earned her BA degree from the same. Following that, she also earned an M.F.A. degree from the Iowa Writers’ Workshop.

But previously, Fatima was a pre-med student who later switched majors to pursue a career in creative writing.

Fatima earned prominence when she debuted her book titled A Place For Us. The book involved a family with three children Hadia, Huda, and estranged son Amar, children of Rafiq and Layla.

The book took the readers back to the beginning of the family’s life. The bond brought them together and differences pulled the family apart.

The story revolved around the family moving to America from India, a story very close to her heart, the community that she grew up in, to her parents, and anyone that could relate to her book.

The book was published by Sex and the City‘s Sarah Jessica Parker’s imprint, SJP for Hogarth. Fatima talked about the unconditional support she received from the actress.

Sarah’s nature of picking up pieces that were dear to her made Fatima confident the book belonged with SJP.

Before the book, Fatima also published two essays titled Boxing, published in Granta magazine in June of 2019 and Skittles published in The Good Immigrants in February of 2019.

When Fatima Farheen Mirza isn’t occupied with books, she demonstrates her activist spirit on her Instagram. She often shares pieces of writing of American writer and activist James Baldwin.

The New York Times best-selling author is a huge supporter of the Black Lives Matter movement. She has also been named National Book Foundation’s 5 Under 35.

From the royalty and proceeds from the book sales, Fatima Farheen Mirza sits on a total net worth of $200 thousand.

Fatima Farheen Mirza and Rid Ahmed met each other at a cafe in New York while he was preparing for the movie The Sound of Metal. Both were there to write as they sat down at the same table.

Both were jostling over the laptop plug and two started their friendship and reconnected eventually. The moment there marked as the pair’s first time meeting each other. Soon after, they started dating.

Riz posted on Instagram details from his wedding day with Mirza. They organized a small and intimate ceremony all because of the pandemic.

The married couple organized the event in the backyard where, as he joked didn’t have 500 aunties hanging around. He revealed details about his wife only after he revealed moments from the wedding day.