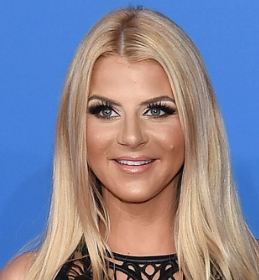 Appearing on “Strahan, Sara & KeKe” in mid-November 2019, Lauren Pesce opened up about suffering a miscarriage.

Per the interview, Lauren conceived her – what could’ve been – the first baby on the night husband Mike Sorrentino returned home from prison.

Calling the miscarriage “heart-wrenching,” Lauren shared that the tragedy occurred when she was seven weeks pregnant.

The miscarriage news arrived about a year after Lauren Pesce and then-fiance Mike Sorrentino’s memorable wedding.

Lauren and husband Mike got married on 1st November 2018 at The Legacy Castle, Pompton Plains. At the bash, daughters of former Jersey Shore stars Jen Farley and Nicole Polizzi served as the flower girls.

Six months before tying the nuptials, Mike had popped the big question to Lauren. Surrounded by family and friends, the lovebirds got engaged most romantically.

Before the engagement, Lauren and now-husband Mike enjoyed a decade and a half on-and-off dating history.

Interestingly though, after officially become Mike’s wife, Lauren changed her surname to Sorrentino.

Fellow “Jersey Shore” co-stars credited Lauren for helping Mike get his life together. She stood by him when he was battling drug addiction.

On the day that he was freed, Mike couldn’t hold back his tears while reuniting with Lauren. The touching moment was documented in a March 2020 episode of “Jersey Shore: Family Vacation.”

Opens Up About Miscarriage

In the “Jersey Shore: Family Vacation” episode aired on 14th May 2020, Lauren Pesce opened up about her miscarriage.

Talking to Mike’s co-stars, Lauren and her husband revealed they conceived a baby on the night he returned from the prison.

About five weeks into the pregnancy, Lauren felt something was off. She then visited a doctor who assured them everything was fine. Later that night, Lauren miscarried.

Admittedly, Lauren felt toxic keeping the miscarriage a secret from everyone. Meanwhile, Mike insisted that they would try again and start a family.

Lauren’s Instagram posts suggest that she is a family person. She often cites her biological parents as her most influential love and life role models.

Back in 2013, Lauren faced an unprecedented family tragedy after losing her baby brother Christopher Pesce to a drug overdose. At the time of his death, Christopher was 25 years of age.

A renowned blogger, Lauren runs a lifestyle blog title “The Style BAE.” Via posts, she offers/commentary on fitness, food, and fashion.

Lauren’s social media following cemented her influencer/blogger status. By 2020, she had 66.4k followers on Twitter while garnering 1 million IG followers.

Together with her husband Mike Sorrentino, Lauren launched a YouTube channel titled “The Situations” in May 2018. By March 2020, they had 138k subscribers and 4.8 million views.

Via “The Sitch Store,” Lauren and hubby Mike sold their official merchandise. The said fashion line even had its own IG profile with over 57k followers.