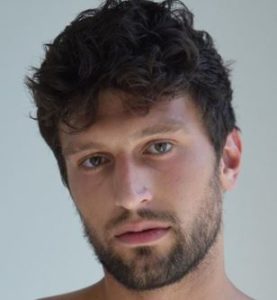 Having his birthday on the third of December, Mike’s zodiac sign was Sagittarius.

Mike Boornazian was born to mom Liz Micale. The internet had no idea about Mike’s dad’s name because he died when Mike was in the third grade. Since his dad’s premature death, his mom raised him on her own and did the role of both his mom and dad.

Even at the age of 26, Mike was very close to his mother. They often hung out, went out for a beer, and when he moved in with his girlfriend Stephanie, they constantly talked on the phone. She even came to their house unannounced a few times.

Seeing such a close relationship between Mike and his mom, Stephanie once said, “Wow, he cannot live without his mom.”

Mike’s mom turned 51 years of age on 15 September 2020. From what we could piece together, Mike did not have any siblings.

Mike was born and grew up in his hometown of Stamford, Connecticut.

According to his portfolio on his modeling agency, Mike Boornazian is a tall guy standing at an impressive height of 6 ft 3 inches.

He possesses brown hair, hazel eyes, and a lot of tattoos. He had tattooed a long text on his left pecs, a roman numeral on the underside of his left upper-arm, across on the right of his abs, and some beautiful calligraphy letter on his left lats. And those were only tattoos we could spot.

There was no information about his weight.

Mike had a relatively larger presence on social media, especially when compared to Stephanie. It must have helped that Mike was already a model before becoming a reality show star.

On Instagram, Mike had a total of 171 posts (as of 24 October 2020), most of which were his own pictures posing with his sizzling body. Some posts were also hot snaps with Stephanie and some adorable ones with his mother. He had a total of over 47k followers.

Outside of Instagram (which is the main social media platform for models and celebrities), Mike was not very big. On Twitter, he had just 105 followers. And he did not have his Facebook Page. His Facebook profile was also very sparse, with a just few photos.

For his high school education, Mike went to Xavier High School. However, for his final high school year and graduation, he went to the prestigious prep-school Wilbraham & Monson Academy located in Wilbraham, Massachusetts.

After high school, Mike went to Bates College for his undergraduate education. He graduated in 2016 with a Bachelor’s degree in English.

Mike is also a model and had an experience of walking the ramp in New York Fashion Week and 2018 Miami Swim Week for Art Hearts Fashion.

According to the sources on the internet, the average salary of a social media manager was almost $68k, and that of a Segment Manager at NBC Universal was $77k.

In 2020, Mike appeared as one of the cast members of TLC‘s new show I Love a Mama’s Boy, alongside his mom and his girlfriend.

Mike Boornazian’s net worth as of October 2020, was estimated to be over $250 thousand.

Mike started dating Stephanie Ressler in 2018 when they were working together on NBC Universal. After dating for about two years, Stephanie and Mike moved in together.

It appeared as if Stephanie was looking forward to being engaged and start preparing for post-wedding life together. However, she was a little unnerved by Mike’s relationship with his mother. 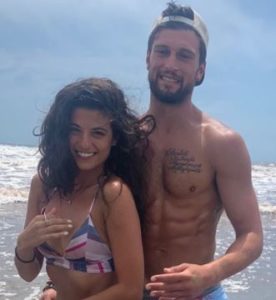 Mike Boornazian and his girlfriend Stephanie Ressler enjoying their time on the beach circa August 2020 (PC: MIke’s IG)

From her words, it seemed as if, Stephanie loved Mike too much to let his mother’s constant presence affect their relationship. Watch I Love a Mama’s Boy to follow Mike and Stephanie’s relationship.