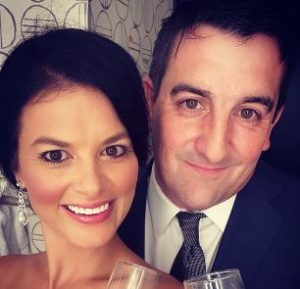 MTV’s The Challenge’s reality star Tori Hall married her fiance Dusty Gwinn. She broke the news on her Instagram and her fans flooded the comment section of the post to congratulate them.

While Tori stole all of the attention as a beautiful bride at the wedding, her husband also shared equal attention. So, for those who know very little about the happy groom, scroll down this wiki article to learn more about him.

Dusty Gwinn shares and his birthday every year with country singer Blake Shelton. The birthday of both men falls every year on 18 June which made them a Gemini.

While Blake turned 44 years old, Dusty Gwinn turned 43 while celebrating his birthday in June of 2020.

In their happily married life of 48 years, Monte & Nancy had two wonderful children, Dustin and his only sibling, sister Heather.

Monte worked for Beckley post office for 34 years and retired from his job in 2009. Talking about Monte’s hobbies, he loved hunting, spending time outdoors, and he loved sports immensely and was a fan of Meadow Bridge Wildcats.

Sadly, Dusty lost his father in April of 2019. Monte was survived by his wife, two children, and his beloved grand-daughter Landrey, and other surviving relatives of his.

Moving onto the section regarding his physical attributes, Dusty Gwin towered up to the height of 6 feet 1 (1.85 meters) until the age of 22 and stopped growing ever since. Likewise, he weighed 82 kilograms (180 lbs) at the time of this writing.

Talking bout Dusty’s social media following, his Instagram account boasted a total of 799 followers at the time of this writing. Wheres, 633 people followed him on Twitter.

Even though he had a Facebook profile, Dusty shared very less on the platform.

Dusty Gwinn built quite an impressive resume with his professional endeavors. But before all of that, let’s peek into his education and the degrees he holds.

Following graduation, Dusty enrolled at West Virginia University College of Law in 2001. He earned his Juris Doctorate from the college in 2004.

While he was pursuing his law degree, Dusty also enrolled at WVU for his masters. He graduated from university with an MBA degree in 2004. During his time as a college, he actively worked in sports management.

Dusty started his career as an attorney working as a patent attorney and general manager at West Virginia University Research Corporation (WVURC) starting in 2003.

In 2004, Dusty founded A & G Intellectual Property Group, LLC, and worked for the company until 2012. He also ran an eponymous professional website from where he offered he offered his legal expertise in several disciplines.

Dusty joined Wild Dog Management, LLC where he worked as a certified contract advisor for the artists, players, musicians, and other personalities the company represented.

The man with limited time, Dusty still explored other professional ventures including general counsel at Martinsburg Mall and Mountain State University/ Foundation, where he also served as vice president of legal affairs.

With an annual salary that averaged around $40,000 and proceeds from different firms where he worked as an attorney and counsel, Dusty made an average salary of $110 thousand.

Pooling all of his income together and adding the years Dusty Gwinn worked, his total net worth hit about $750 thousand as of the time of this writing.

While some might argue, that Tori Hall from The Challenge rushed into her relationship with her attorney boyfriend. She slammed with even more shocking news by posting the pictures of her marriage to her fiance a month after getting engaged.

The pair started dating each other starting in January of 2020. And eight months after, Tori accepted Dusty’s proposal for her hand for marriage at RH Nashville Cafe. The pair announced their engagement on 27 September on their respective Instagram.

For the wedding, the bride looked beautiful sleeveless floral gown, matching veil, and a pair of earrings that complimented her looks. Whereas, the groom donned blue shits with, grey tie, white shirt, and brown shoes.

Before Dusty, Tori married the Challenge co-star Brad Fiorenza in 2010. However, their marriage met a dead end after they separated in 2015 and got divorced in 2016.

The pair have three children altogether from each of their previous relationships. While Tori has 2 kids — Brady (b. 2011) and Chase (b. 2015) — from her marriage to Brad, and Dusty has a 9-year-old daughter named Landrey earlier relationship.