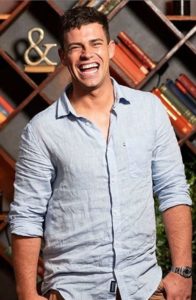 Michael Goonan made headlines with his name when he appeared in the reality show “Married at Frist Sight” together with his partner Stacey Hampton.

In the show, he quickly separated from the crowd for his epic sense of humor, charming & confident personality.

But that was not only the attributes that the fans picked up. As the show progressed fans got a new perspective of Michael and labeled him as “Serial cheater”.

What was the reason behind that? Stay tuned and know more about it from the article. In doing so, get acquainted with his wiki, net worth, plus height!

Micheal Goonan turned 28 years old at the end of 2019 and stands tall at a height of around 5 feet 8 inches.

His exact date of birth is under wraps, but he was born around the year of 1991/92. Micheal was put into the spotlight with his appearance in the show “Married at First Sight”.

From then on he gained a massive fan following of more than 50K followers on his Instagram.

Michael Goonan was born in a rich family who migrated from the UK to Australia in 2000. His parents ran a nursing home in England before moving into the food manufacturing business.

From an early age, Michael engaged in work rather than playing with his siblings. In his MAFS introduction, he even said: “I can’t remember a week since when I was 12, a week when I wasn’t working. I’m the director of a cold-storage and food manufacturing business”.

Which clearly stated his busy work profile. Soon, Michael became the shareholder in his family business and also the director of the “Adelaide Ice” company.

How often do you come across a man who can proudly say he became a millionaire at the age of 24. Amongst those few stood the name of Michael Goonan.

Working hard in his family business, Michael was quick to make a fortune and call himself a millionaire. He became the director of “Adelaide Ice” and took over the family business.

After getting established in the market, he even co-owned a wine company with his friend, Calvin Daniels called “Australian Sapphire Enterprise” in 2019.

From all his staggering job profile, Michael accumulated a net worth around $1—1.5 million for himself.

Apart from all the success that circled Michael Goonan’s life, the one thing that he was not good at was staying in a relationship.

Before falling in love with Stacey, Michael was in a relationship than came to a pitty end in 2019. Though the name of the woman with whom he was dating was not mentioned, he did become a father from their relationship.

After the separation, Michael and his mystery baby mama shared legal custody for the child.

Michael Goonan did not have a good outing from his first relationship. So, he went onto getting hooked up in the show MAFS with Stacey Hampton, a lawyer to be.

Though the exact information of them getting married was a doubtful question in people’s heads, the couple called each other husband and wife. 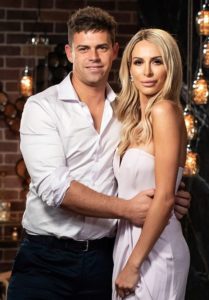 However, things were not that easy for the two. Following a scandal involving bride Hayley Vernon, Michael was accused of trying to seduce her.

The news brought a huge storm in Micheal and Stacey’s relationship and people gave him the tag of “serial cheater”.

After a much horrid start to a new beginning in Michaels’s life, things started to fall back to normal in March 2020.

Following the cheating incident, Stacey decided to forgive him and Micheal to addressed his love for her.

The two came back to terms again and moved onto something new in life.