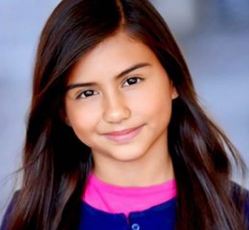 Circa 2020, Madison Taylor Baez sprung to the national spotlight after landing a high-profile role. She was cast to play the young Selena in the upcoming TV show “Selena: The Series.”

This Maidson Taylor Baez wiki aims to reveal the identities of her parents and siblings. What’s more, it reveals her height, age, and movies.

Madison Taylor Baez shares her birthday every year with TV actress Brittany Raymond which falls on 24 February every year. But unlike Brittany who turned 24 years old, Madison turned 9 years old in 2020 as she was born in 2011.

Both Madison and Brittany secured Pisces as their zodiac sign and embraced character traits that came with their zodiac such as mysterious and spiritual among a few others which suited their personality.

Madison Taylor Baez was born to her parents Chris Baez and Mary Rose Baez. Her father hailed from Lakewood, California where he earned his bachelor’s degree in computer science at California State University.

Moreover, Chris went on to work as a Sr. software analyst and software development consultant. He also worked as an owner and property manager at Storybook Manor Big Bear.

Moreover, Chris is the CEO of MaddieGirl Entertainment Inc.

However, no information details on her mother’s career have been recorded as of the time of this writing.

As social media of Madison’s parents suggested, Madison doesn’t have any siblings as of October of 2020.

Thanks to the exposure from Selena, Madison garnered a respectable social media. Also, her parents moderated her social media presence.

Meanwhile, Madison didn’t seem to possess a Twitter handle. Given her age, many understood why her parents wouldn’t let the young actress be on the micro-blogging site.

When a large number of children in Madison’s age-group are occupied being kids, she went on to attend fame at a very young age. Her vocal trajectory has been admired at several places and even earned her a name, America’s Anthem Girl.

As of the time of penning this wiki, Madison performed the national anthem and venues. She delivered her soulful and powerful rendition at several places including in the game of LA Dodgers, Lakers, Rams, Kings, Galaxy, Harlem Globetrotters and many high-profile charity events were of her notable venue where she performed.

Madison also appeared on Kids Say The Darndest Things hosted by comedienne Tiffany Haddish. In the show, she sang Listen of Beyonce which earned her a standing ovation.

In September 2020, Madison announced that she was working on an 11-track Christmas Album.

Not only that, but Madison has also been featured on numerous networks including Fox 11 News, ABC 7 News, CBS 2 News, and a few others.

Her career as a singer took her places, but she also explored her talent in acting starring in local and national commercials. Madison appeared in the advertisement of FujiFilm, Walmart, Chevy, McDonald’s, and a few notable others.

In November 2020, Madison announced on her Instagram that she will be appearing as Selena Quintanilla in Netflix’s Selena, The Series.

With Madison’s career as a singer and an actress, she also took payment for her hard work. As of 2020, Madison Taylor Baez is estimated to worth about $150 thousand and whatever she inherits from her parents.

After Netflix announced the premiere date for the highly awaited show Selena: The Series, actors, and actress...