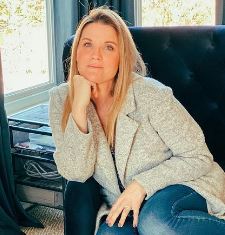 Leslie Davis earned prominence as one of the reality stars of HGTV’s home renovating show Unsellable Houses. She starred alongside her twin sister and her business partner. They starred in a reality show and their business boomed even more. So, before the new season hits the TV set, let’s delve into this article based on the life of Leslie Davis.

Leslie Davis was born in April 1981. She turned 40 years old while celebrating her birthday on 4 April 2021. Furthermore, Leslie secured Aries as her zodiac sign.

Leslie Davis was born to her anonymous father and her mother Kathy Kuna DeWitte in her hometown of Snohomish, Washington, the United States. Her mother is featured on her social media, she also owns a Facebook profile, that holds very little information about her right now.

Moreover, Leslie has a twin sister named Lyndsay Lamb who is three minutes older than her. The twin sisters also have an elder sister named Jennifer LaCourse Starling. A mother of two daughters, Jennifer’s socials shared no information related to her husband.

Talking about social media reach, Leslie Davis is on Facebook where she shared multiple snaps of her family members, her kids in particular. On Facebook, she posted a picture of herself with her sister when they were young.

In the same way, Leslie is also on Instagram with 7048 followers in total. She posted 105 times on the platform as of April 2021. But, she doesn’t seem to be on Twitter.

As one of the identical twins, people would often mistake Leslie for her sister, Lyndsay. However, the sisters never had desires to look and dress the same and understood that they were separate individuals with completely different personalities.

But when Lyndsay decided to get bangs when she was in sixth grade, it was easier for people to distinguish between the two sisters. In fact, Lyndsay claimed the bangs which had Leslie resorting to different hairstyles.

In 2020 alone, Leslie and Lyndsay’s real estate business traded over 300 houses. Since they were at it starting from 2015, Leslie Davis’s estimated net worth was assumed to be between $1 million to $1.5 million.

After high school, Leslie commenced her professional career in her ’20s. She started working in marketing for Dream Dinners, a franchise that her aunt Tina Kuna co-owned.

Leslie immersed herself into taking care of her kids so she decided to become a stay-home mother. Only after Lyndsay started working as a real estate agent, she joined her to help her in the business.

In fact, Lyndsay was going through a family crisis, so Leslie decided to support her business and got her real estate license. With her 7 years’ worth of experience in franchise sales for a national food brokerage firm and 2 years working as a real estate transaction coordinator, she exuded expertise and trustable nature.

Together, Leslie and Lyndsay built a huge business as real estate agents. Not only the business bloomed, but it also helped set them on a new career path as reality stars. They were approached by High Noon Entertainment for the show. High Noon Entertainment found them through YouTube which gave them the idea to create a TV show. Later, the show Unsellable Houses came into existence.

With a distinct set of skills each possessed, the twin real estate agents became an unstoppable force in business and on the TV set.

Leslie Davis met her husband, Jacob Davis, in high school. Jacob and her sister’s boyfriend were roommates in college.

After dating for a while, Leslie tied the knot with Jacob Davis on 12 April 2002. In April 2021, the married couple celebrated their 18th marriage anniversary.

Furthermore, Leslie. who worked as a stay-at-home mom, shares three sons with her husband. The sons were Kyler, Cash, and Cole. The twin sister lived miles apart and the eldest of their sons even became best friends.

Her sons are featured on her social media and Leslie seems very close to all of her kids. In March 2021, her eldest son Kyler turned 16 years old so she and her husband got him a dirt bike.