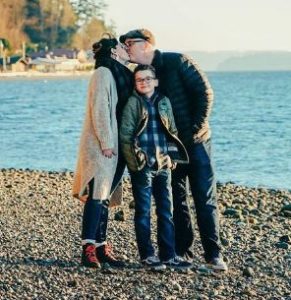 Justin Lamb is the husband of HGTV reality star and real estate agent Lyndsay Lamb. And now that the show’s season 2 was expected to return in 2021, Justin also drew attention towards himself for being his marriage with Lyndsay.

So, scroll down this Justin Lam Wiki to learn more about Lyndsay Lamb’s husband.

Justin Lamb shares his birthday every year with actress Zendaya as it falls on September 1. Per his date of birth, Justin secured Virgo as his zodiac sign. Being born in 1980, Justin turned 40 years old while celebrating his birthday in September of 2020.

Justin Lamb was born to his father Kenneth J Lamb and his mother Anna Lamb in his hometown of Snohomish, Washington.

A Vietnam veteran, Kenneth loved horseback riding, reloading, hunting, and reading the bible. Sadly, Kenneth’s family saw him for the last time on 9 September 2015 when he passed away.

As for Anna Lamb, she attended Bothell High School and North Seattle Community College. As for the job, she worked as an underwriter at Farmers Insurance Group.

To add more to Justin’s family, he has a sister. While no information surfaced on her, she is believed to be Julie Lamb.

A middle-aged man, Justin lost a lot of hair as he aged. One distinct feature of Justin is he puts on glasses to aid to his poor eyesight. While some of his patchy hair is still black on the scalp, his facial hair has turned white and grey.

Unlike his wife Lyndsay, Justin Lamb couldn’t be discovered on any of the social media platforms. However, he was featured a couple of times on his wife’s Instagram. Moreover, he was also nowhere to be found on Twitter and Facebook.

So why is it that he is not on social media platforms? Because, back in 2011, HeraldNet wrote a piece on Justin where it was reported that he doesn’t use a cellphone.

To talk about Justin’s actual job, he works at Fred Hutchinson Cancer Research Center in Seattle. He is also a member of Stationary Engineers Local 286. Those are his day jobs. But Justin is best known around town for typewriting rather than using computers.

Whether it was a hobby or a job, either way, Justin found his love in typewriters. He kept a typewriter as decor in their classic home near Snohomish High School which he attended as a teen.

In his office, Justin kept three old models on display. For Justin, typing letters and sending them through U.S. mail has a personality in it that technology doesn’t provide. In his own words—”I’m not into technology,” Justin voiced. “I grew up with computers. They aren’t fun to me. Sending an email has no personality.”

But everything has a beginning and Justin’s collaboration with the typewriter began during a friend’s wedding in 2006. He wrote a fictional story about his friends and prepared the wedding gift where he wrote it with a typewriter font.

Ever since then, Justin started exchanging and corresponding through typing paper.

Justi Lamb used several typewriters but the one that he loved the most was Olympia SM3 from 1957. He also has Royal Standard portable dating back to 1935. Additionally, he does repairing work and invites people to do that by leaving it in Uppercase Books and Collectables where he visited on a daily basis.

Besides that, Justin earned himself a name as a writer. We don’t know for sure whether he makes money out of it or not but he loves writing stories and poems. He ran a blog titled snohmishwriter.

The same goes for his work, he types his work, scans them, and uploads them online with a laptop.

Talking about net worth, Justin Lamb should have an accumulated fortune of almost $1 million.

In April of 2021, The List wrote a piece on Lyndsay Lamb and Leslie Davis titled, Lyndsay Lamb And Leslie Davis Tell Us What To Expect On Season 2 Of Unsellable Houses – Exclusive. There they cited Distractify as the source claiming, Justin Lamb along with Jacob Davis, could be expected to get their fair share of time on-screen.

So, yes, Justin Lamb might appear on Unsellable Houses, as noted by Distractify.

Justin and Lyndsay met each other in high school. And soon after, they started dating and have been together ever since then. While the date of their marriage remains unclear, they were married for over 20 years. Together they had a son, Miles Lamb.

But back In 2013, Miles was diagnosed with cancer and this halted her professional life.

And during that time his wife Lyndsay stayed back home, looking after her son while her sister took over the business. Within a year, Miles got treated, and then she resumed her career as a real estate agent. As it seems, his son won cancer with battle.