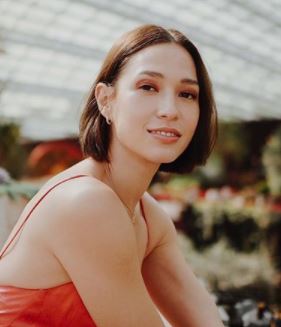 Liv Lo is the “The Best Woman in the Whole Universe” or at least that what she is for her the Malaysian-British actor, Henry Golding. Defining Liv as “strong, extremely loyal, and independent,” Henry shared that she was the world to him.

In early Nov 2020, Henry revealed that their love was soon bringing a new life into this world.  The soon-to-be dad shared the good news over Instagram, which also got the fan’s attention turned towards the soon-to-be mom, Liv.

So, here we are shedding light on the personal life of Liv Lo over this Wikipedia.

Corresponding to her birthday, Liv’s zodiac sign is Gemini.

Liv Lo was born and raised in Taichung, Taiwan in a bilingual household until 17. Her mother, Mary Chen is Taiwanese while her biological father is Italian. So, that makes her of mixed ethnicity.

Also, Liv shared that she never met her biological dad. Her dad with the surname “Lo” is from Hong Kong and raised her and her late-brother bilingually “because they wanted a bigger world for our family.”

Unfortunately, her brother Sam passed away in early 2019. He would have turned 30 in December that year. Furthermore, she defined Sam to be her brother as well as her best friend. They would share their “ambitions and dreams” together and talk about “friends, food, and funny observations”. Also, whenever Liv would visit Hongkong, the siblings would meet up for “Michelin Star dim sum and tea”.

In Dec 2019, Liv took it to her Instagram with a picture of her brother and wrote,

“I want to tell you that I was brave enough to reach for my dreams too. To break my mold and truly live like every day is my last. Sometimes it’s painful, but I remember all you taught me in your life and in your death.”

As for her nationality, Liv Lo was born Taiwanese and later acquired British citizenship.

Reportedly, her body measurements were 34-24-34 inches.

Also, find her on Facebook @LivLoGolding with 9.7K followers and Youtube @FitSphere by Liv Lo with 4.75K subscribers.

Talking about her job, Liv is a TV host and yoga trainer. She hosted shows on Xing Kong, Fox Sports Asia, Star World Asia, and more. Also, she is famous for her role as Sophie Thomas in the series Point of Entry.

Furthermore, during her quest to find a functional workout plan,  Liv founded a fitness website FitSphere in 2017. Also, she taught yoga six to seven hours a week at Yoga Movement.

Before all these, Liv started as a model in Taiwan at the age of 17. She later participated in Asia’s Next Top Model but couldn’t take the title home. Reportedly, she worked in the fashion industry for 8 years before moving to Singapore in 2012 with her husband, Henry.

As for her diet, Liv took vitamins because they gave her “a boost of energy and endorphins”. She didn’t have particular fad diets, she drank more water and took a lot of Vitamin C supplements.

In light of her education, Liv has a bachelor’s degree in Mass Communications from Temple University, Japan.

Liv Lo and Henry Golding started dating back in 2011. They first met at a party on New Year’s Day. After locking eyes, Liv made the first move and made her way to introduce herself to Henry.

According to Henry, Liv said,

“Why haven’t you said hello to me yet? I’m leaving tomorrow and you’re never going to see me again, what are you going to do about it?”

Talk about being a badass.

Dating for exactly 4 years, on their fourth anniversary, Henry proposed to Liv. And a year after engagement, the duo held their wedding at the Cove 55 resort in Sarawak, Malaysia on August 20, 2016.

Now, four years after being married, Liv and Henry are pregnant. On November 6, 2020, Liv took it to her Instagram to share the baby bump alongside her husband, she wrote,

“Such immense joy this little one has brought us already. Now we get to share it with you.”

On 31st March 2021, Liv gave birth to their first child. At the time, neither she nor Henry revealed the baby’s gender and name. However, the fitness guru shared she was taking 40 days maternity leave from Instagram.